Patrons of the Press, Benefactor of the Blog

What a furious blizzard of chaos my life has been this fortnight past! It seems as though every waking moment is consumed with something, what exactly I do not know, only that it is consumed (much in the manner a gently breaking chocolate chip cookie is consumed by a hungry child). Oddly enough, the television series Heroes seems to be encroaching upon my scant spare time (and I do mean that in the most sarcastic sense)... However, the show is so utterly transfixing that it is hard for me to spare a thought to plan my escape. I think that Netflix, that sanguine patron god of the couch potato, has hooked his deadly claws in my vapid and consenting brain.

Aside from this not so paltry distraction, 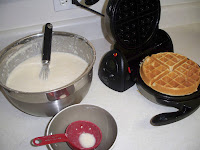 I have kept myself industriously occupied. I cooked and froze a mountain of waffles, which are useful for busy mornings when we need a hearty breakfast. I have not canned a great deal more, just applesauce, some juice concentrates, and unfortunately ate all of the nectarines I was going to can (they were quite delicious and they were, after all, purchased to be ultimately eaten, as Mr. H pragmatically pointed out). So, I was not compelled, in the end, to store the nectarines at all.

With that weak segue, allow me to point out that it seems to be quite American to stash and horde Stuff, although not necessarily with the intent of using It again; just with the intent of not throwing It away. We have a unique and special method of clearing space (ideally, with the goal of having room in which to move in new Stuff). Recently, I was driving behind a truck that was on its way to the dump (this seemed to be a safe deduction, based on the content of the truck, as you will see if you will only just read on). In the back of the truck were such random miscellany as a piece of foam, punctured with holes and dirty; an aged computer with the chisels from a stone-masons tool still visible on its prehistoric sides; a broken lawn chair, similar to the ones one sees in Ma and Pa Kettle shows; a crushed carboard box; and so on. Imagine my surprise (or singular lack thereof), when the truck bypassed the route to the dump and turned, instead, into a Public Storage parking lot ($1 Buys One Month!!!).

Why do we hang on to our Stuff like that? I don't know, but one can postulate that it is perhaps because there is a certain amount of security to be found in Stuff, albeit a false security. Also, there is that rat-like tendency to save, save, save, with the hope that one day you will be able to use it (if, perchance, you can remember which Unit it is in). There is no real moral to this story, except to say that if you have enough money to rent a storage unit for Useless Stuff, you probably have enough money to buy a new Stuff, if you should chance to need it one day.

With this healthy aphorism, dear reader, I will close this epistle and leave you in peace.