What is a Haagerschnitzel? And, How to make a baking pan

To the astute reader and the curious Germans,

You may never have heard of a Haagerschnitzel, but I'll define the term loosely for you.  It's a decadent roll, made by German housefraus and a traditional treat made by Navy wives.  It consists of a sweet dough, rolled with cinnamon, sugar, cardamom, and butter, and laid in a deep pan coated with a caramel slurry.  it is then baked for about twenty minutes, and dumped out of the pan to produce a smashed-looking flat roll, swirled with caramel-cinnamon goodness.


Julia Child once said, "Never apologize for anything that comes out of your kitchen."  This has become one of my three life-mottoes (the others are, for the record, the more the merrier and waste not, want not).

That is where the haagerschnitzel came from.  As Mrs. S and I stood dumbstruck in front of four pans of shoulda-been cinnamon rolls, we realized that they looked nothing like what a cinnamon roll should.  The dough, having suffered several slammed doors, extreme cold, extreme heat, humidity, a car ride across town, and a thorough beating, rolling, and baking, had collapsed in utter exhaustion into the puddles of caramel, and sagged wearily across the pan like a pathetic child that does not want to finish his chores.


So much for sticky buns, we said grimly.  But, we were not conquered yet - these were most definitely not cinnamon rolls, Mrs. S determined, but they were in fact something.  We just had to come up with the name.

"Something French," I suggested.

"I never took French," she said Rue-fully, "but I did take some German."

"Aha!" I said, and stared into the pan at the sad, drooping buns.  "How about .. haager ... schnitzels?"  It sounded pretty German to me, and most likely was birthed from years of watching Hoganschmidt come up with fanciful German names on the fly to evade the Nazis.  Triumphantly, I followed up the new term with the description I just gave above, and Mrs S acknowledged that it was Good Enough and we agreed to complicity.

That evening, in our respective homes, we served our haagerschnitzels to receptive audiences which accepted them without complaint and commented that they were very good.

As Ma Ingalls used to say, "It's an ill wind that blows no good."

In pursuit of new creations and ever-cleverer terminology,

Kitchen Understudy: How to make a baking pan in a hotel room

I ran out of pans for rolls, but I had a shallow baking pan.  I lined it with two layers of foil and then crushed them up and around to make a pan.  It worked quite well!  It was sturdy enough that when I flipped the pan over to dump out the haagerschnitzels and caramel, it did not fall apart.  If you were desperate enough, this would probably work okay without the bottom pan for support; it just wouldn't be easy to transport in and out of the oven! 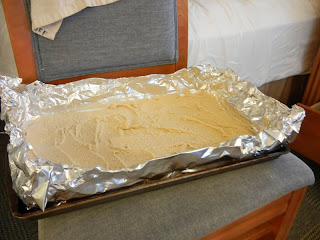