To the timid and intrepid alike,

On the East Coast, there is a phenomenon not known in the cooler states of the West Coast.  This phemon single-wingedly wreaks terror and havoc upon an innocent population, and their presence has created a market for enterprising exterminators who, pardon the pun, prey upon the weak-mindedness of the average person.

I speak, of course, of the cockroach.

I have had more encounters with them than I care to (that is to say, one or more)) since moving to the fair state of Virginia.

Most recently, I was stalked and chased by a large example of said species, Periplaneta americana.  It should be noted here by the gentle reader that this particular variety bears the celebrious distinguishment of being the fastest of his kind, reaching speeds of up to two miles per hour.  For a 1.2" average length creature, that is pretty distinctive - adjust for his size and were he, say, a lion, he would be running at speeds of 50 MPH.

In other words, the flat, nearly indestructible pest of the order Blattaria is the cheetah of bugs.

I had gone into the laundry room to fetch something - Lord knows what, only that I did not emerge with it.  I flipped on the light, moved a box and like a speeding devil, out came the black shape of a cockroach.

Wheeling, I ran for safety.  I dashed into the kitchen.  Tail waddling from side to side, he followed.  I made a hard turn around the fridge and headed for the dining room; I could almost hear his heavy breathing, rattling through the exoskeleton as he scuttled across the linoleum, dodging the produce box and the kitchen stool.  I sped into the dining room, wailing for Mr H.

Good husband that he is, he came running with the Cockroach Killer - a spear that puts the Masai warriors to shame with its lethal effectiveness and household versatility.

Raising it high like a mandrill dedicating a baby lion king, he brought it down with a thunderous crash, flattening the panting vermin in its tracks. 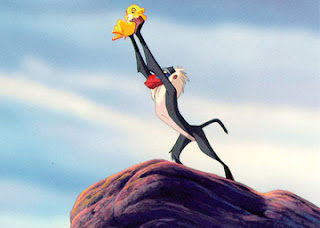 
For a slightly less violent, but just as deadly approach, you can spritz them with soapy water - it dries out their exoskeleton and, apparently, they can't breathe and die.  When the baby boy was just two weeks old I was feeding him in the middle of the night when I caught a huge cockroach running over his clean diapers and burp rags beside the bed.  It was dark and Mr H was asleep but I unloaded almost an entire bottle of soapy water on him ... it took some minutes but he eventually expired.