Join me for a moment in the world of contemplation and thought, where the material slows to a halt and the mental consumes our focus.

Our class was assigned to consider some ethical complications of neuroprosthetics, a very possible future technology in which we can enhance or recreate cognitive and sensory processes in humans. You could, for instance, have neurosurgery in order to be a math whiz, or to have an incredible memory for every fact or number you encounter, or to be able to perceive sounds from miles away, etc. This brings up a number of moral dilemmas,as you can imagine. The following question was posited by our teacher.

Research Assignment for Biopsychology Class: Question # 4. Would you become “less” human with all of these prosthetics?

Perhaps the knowledge of one with a neuroprosthetic would be valued and yet not admired as much as the naturally acquired abilities of an unmodified human or a savant. While intrinsically speaking the knowledge or ability would be the same in both, its artificiality in the former may to some degree taint its beauty or metphorically cheapen it, similar to a manufactured ruby which is physically and molecularly identical to a natural one, and yet cheaper and less valuable by virtue of its unnatural fabrication.

To know if a person would become less human by means of the use of neuroprosthetics, scientists must first grapple 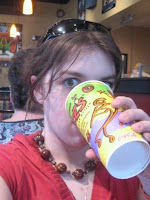 with the complexity of what makes us distinctively human. Since scientists have worked tirelessly to erase any distinction between humans and other mammals, can we then not pointedly ask them how anybody or anything could become less human?

Email ThisBlogThis!Share to TwitterShare to FacebookShare to Pinterest
Posted by Mrs. H at 8:24 AM