Two Weeks Can Seem Quite Long

On Saturday evening after a full day of packing and housecleaning, Mr. H and Joe (his brother) decided it would be best if Mr. H were to ride with Joe and Kristina in the U-Haul to help them move into their new house in New Mexico. Mr. H packed up a duffel bag that night, and on Sunday morning we got up at 4 and headed over to Joe & Kristina's house in Bothell. We finished stuffing things into the U-Haul, vacuumed the living room carpet one last time, hitched the Jeep to the back of the truck, and they took off.

And then, Mrs. H was left all alone!

I grew up with seven other siblings, and lived at home until Mr. H whisked me away to be married; so I have essentially never lived on my own! Even if I was housesitting for a friend, I usually had a sister with me and if no sister, a few dogs and cats.

The first evening was very long, and very quiet. I would have gone to an evening service at church to get out and about, but I had to complete a homework assignment. When I left to go to the bookstore for a while, I intentionally left a light on in the living room so that I wouldn't have to return to a darkened house!

It took me quite some time (about an hour) to fall asleep the first night of Mr. H's absence. I slept very lightly and woke up many times to check my phone and see if there were any messages from him, as he was driving straight through the night with his brother.

Despite the lack of sleep, by 4AM I didn't even feel tired and I was off to the swim class at the YMCA. My coach understood the strangeness of aloneness as her husband is currently working in Flagstaff, Arizona. "Come swim any morning if you get lonely," she said, "and I'll be here! But it's the evenings that are the hardest." As long as I keep busy, it doesn't seem too lonely.

The mornings seem even stranger than the evenings, I think; Mr. H is not in the bathroom brushing his teeth, or pulling me out of bed, and I am not packing a lunch or making Pop-Tarts for his breakfast. On Tuesday, I kept hitting the snooze button on my alarm like a morphine drip, and got out of bed a full 45 minutes later than normal.

I can't help but think of my girls with husbands in the military (Kira, Kimberly, Allison!). I am impressed with how they deal with their husbands' absences, especially in the case of Kira, who has little ones to watch. You girls are my heroes!

I have a suspicion the menfolk don't always miss us as much, because they are in strange foreign surroundings with new tasks and even dangers to keep their minds occupied. To be at home repeating the rituals of normal life with a blank spot left by your spouse can be, I think, the lonelier of the two.

But Mr. H will be home by the 12th, and in the meantime, he is helping his brother and sister in a much-needed way; and that brings great joy to both of us! 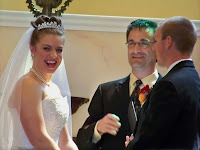 Email ThisBlogThis!Share to TwitterShare to FacebookShare to Pinterest
Posted by Mrs. H at 8:13 AM
Labels: Home life, travel