Mr H and I went to a food auction a few evenings ago.

Held at the location of our local farmer's market, the auction consists of large amounts of surplus produce farmers in the area haven't sold.  It is indeed, as it was described to me by the friend who informed me of said event, "glorious!"

It begins much like any auction: after registering with the ladies behind the cashier's table, you are assigned a number on a card and head out to the auction floor.  This number will be yours all season and, presumably, in future years as well. 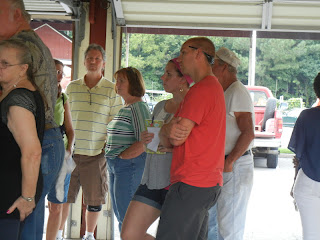 The auctioneer has a podium on wheels and is attended by a lady with a clipboard.  He rolls up to the first pallet of produce boxes, which has a number stapled to it - that farmer's unique ID, which will enable him to be paid when the night is through.

A boy will hold up a sample of the item in question at the moment - maybe a box of peppers, a watermelon from a pile of twenty, or a sack of potatoes.  The auctioneer will assign a fair price to the unit being sold, say, the box of peppers.

"Nine dollars for this box of pepper!" he'll begin, and the bidding will go from there.  Usually it goes up.  When the bidding stops, he'll ask the winning bidder if they want just one box of peppers, or all the boxes on the pallet.  Usually they only want one or a few of the units, but occasionally somebody is buying for a restaurant or for canning and wants them all.

If the winning bidder only opts to take one or two boxes, then the rest are sold off as fast as people can hold up their numbers.  The lady with the clipboard records which numbers purchased what.  Sometimes, like was the case when there was a huge box of watermelons, everybody that wants a watermelon has taken one and there are still more left.  In this case, the auctioneer starts sliding back down the price scale - the prices can get pretty hot, and then they go.  As happened with the watermelons, there were still more left that nobody wanted, so the price plummeted with the stipulation that you buy, say, two of them at a time.  Or in some cases, as happened with a bunch of canary melons, the prices is rock bottom if you buy them all. 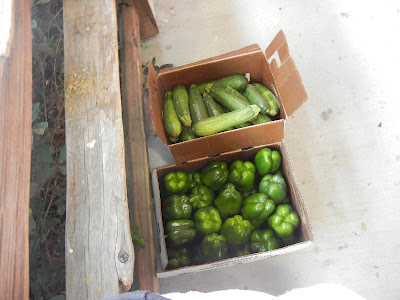 If you wander around the auction floor in advance and see perhaps four unique pallets from different farms, all with zucchini on them, you know that the later zucchini will probably sell for a lower price than the zucchini that goes up for bid first.  Some popular items go up in price as the night goes on.

The point is not necessarily to get the lowest price you can possibly walk out of there with.  This is an insult to the farmer, who put in hard days to raise the produce.  The point is to get lower than market price, but not so low that it's a slap in the face.  Produce needs to move, and it needs to move fast, so farmers can't necessarily set it aside to sell when demand is higher - they need to sell it now.  This is part of the risk of farming, and part of the excitement of trying to buy.

Mr H and I, in our effort to eat local food, find ourselves not necessarily bidding on the hot commodities that we really want - but instead developing a taste for, and learning to use and preserve, items that may be more foreign or less popular.  This is all a part of living and eating well, on a strict and unbending budget. 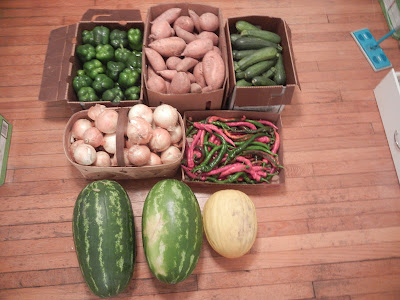 We didn't get much, because there wasn't much in the way of bulk produce for sale.  We did walk away with green bell peppers, sweet potatoes, zucchini, onions, mixed hot peppers, two large watermelon, and a canary melon.

I brought my notebook, ID, and a checkbook.  I took notes on the prices things were going for so I could compare prices the next week, and see how things lay in the good state of Virginia. 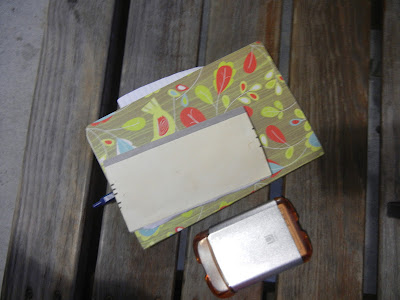 The little man enjoyed himself, spending time with Auntie Jessie and taking pictures. 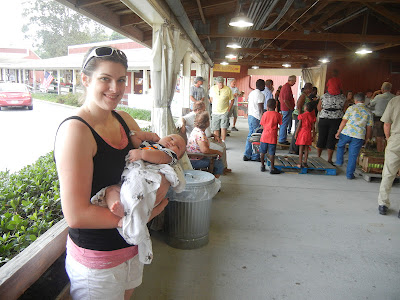 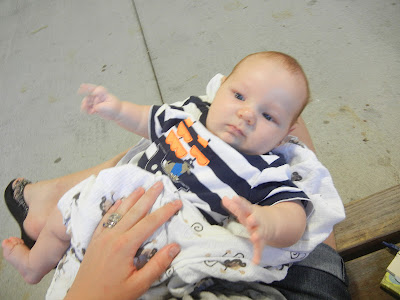 After the auction, everybody loaded up their produce and the floor was cleared again, ready for market in the morning. 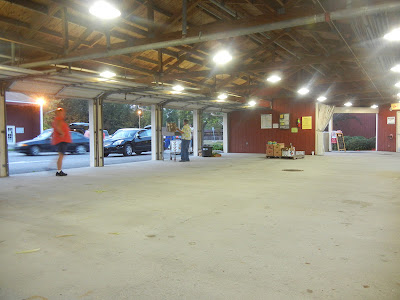