Skim Milk Makes You Fat? What?

I used to use skim, ultra-pasteurized milk - I can't say I drank it, because I would never just down a glass because it doesn't taste great straight.  I drank skim because I thought it was healthier. I didn't even realize you could drink whole milk – I thought that something akin to drinking half-and-half, or dancing in a moonlit field with the devil. 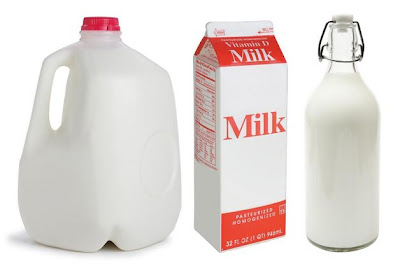 I started learning about the devastating health effects of ultra-pasteurization a year or so after I got married and started seeking out low-heat pasteurized milk (which is still a better option if you can't obtain raw, in my opinion), and shortly thereafter my cousins introduced me to the glories of whole milk flavor - who knew?  Eventually I decided organic, non-plastic-bottled was another layer I wanted to add to our milk, and then I heard about raw - something I had previously thought may or may not kill you, depending on the alignment of the stars etc.  Shocker - it's safer than grocery store milk.  And better tasting, to boot.  This spring, with a confluence of education overwhelmingly pushing us in that direction, we made the leap to whole raw milk from grass-fed, organically raised cows.  And for you recyclovores, you will be happy to know we use the same glass half-gallon jars every week - so there is no additional waste involved.

Recently we were at a breakfast event and there were little cartons of milk on ice.  I wasn't a milk drinker before, although I used it on cereal and had it with brownies or cookies, - but, having now developed this taste for it I was hungry for a glass.  In fact, speaking of drinking more milk, my "lactose intolerant" husband won't go a day without drinking a huge glass of milk in the morning - hmm, maybe he's just "garbage intolerant?" At any rate, I wanted some milk so without really considering the facts I took one, popped it open and chugged a sip.  Too late, I realized the milk had spoiled and gone bad – the distinct rotten flavor was revolting and I almost spit it out, but didn't want to gross out my tablemates.  But then I took a sniff, and another small sip, and realized with a sinking feeling that it hadn't actually gone bad – it was supposed to taste like this.  I had just grown so accustomed to the purity of good milk that this thin, watery, rank liquid being sold to a trusting, uninformed public as milk was now apparent to me for what it really was – garbage!

Maybe you are a taste fanatic and would switch to raw (or low-heat pasteurized, cream-top) milk just for the beautiful flavor, or maybe you're a coffee addict and get really technical about things, but maybe you – as I did – need some scientific convincing before a) spending lots of dollars because real milk is not as cheap as mass-produced skimmed milk, and b) flying in the face of convention, something we seem to do a lot of around here.

Over the summer, I read The Untold Story of Milk.  It is a pretty long book but if you are of a scientific mind, you will perhaps need a long book to convince you against the years of tradition (and by years, I mean just the last few years in America, not the entirety of human history around the globe - because that evidence never changed).  However, if you are concerned now, and you don't have time to read the book at the moment, you can get a nice summary of the basic health facts here, in an article titled Why Skim Milk Will Make You Fat and Give You Heart Disease.  To perhaps the alienation of some of her audience, this authoress does not mince words when addressing a topic that is near and dear to her heart - but she should be angry, I suppose, because misinformation is killing people in our country on a daily basis.

I don’t want to regurgitate everything she says, because she puts it all quite eloquently (although she does bash us for drinking skim milk, which hurts … ouch, Sarah! Enough of the bashing, we’re already dying of heart attacks, no need to twist the knife), and more succinctly than I could.  If you want to examine the studies to which she refers, you can find citations for them in The Untold Story of Milk, and an examination of them in greater (sometimes tedious) detail.  As an aside, if you have concerns about cholesterol, I would quite seriously entreat you to get the book and read it as a lifesaving measure.

However, I will warn you – after you’ve read this, you will perhaps feel so ill you will never look at a glass of Darigold the same again, so only read it if you are prepared to make a milk revolution in your life.  If you aren't, save the link for another day (this assuming the atherosclerosis does not get you between now and then).  No, no this isn't a tear-jerking article about cows falling over dead at the milk stanchions or a gag-me narrative about pus being boiled into the milk, although both of these events happen (if you've consumed milk in plastic gallon jugs from the grocery store, I can guarantee you have consumed pus – but don’t worry, it’s pasteurized).  Imagine for a moment we don’t mind pus one whit, and it doesn't bother us if diseased, malnourished and over-used milk cows fall over dead producing for us with a lifetime a fifth that of cows that live outside of factories on real farms.

Let's talk about milk, because this is important.