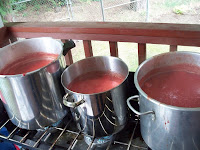 Last Friday Mr. H and I took my brother's truck and picked up a round 410 lbs of tomatoes (the next day this was supplemented by an additional 40 lb box from the same farmer). Needless to say, the last week has been spent sorting, washing, coring peeling choppingblendingandotherthings. My friend Miz Carmen and I placed the bulk of the order together, although smaller portions went to a few friends; she and I have spent many late nights bent over the pressure canners! 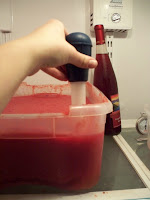 We read some very useful tomato tips from another home-canner's blog; after blending tomatoes for sauce, let them sit in the refrigerator overnight to separate the majority of the water from the tomato. The water settles to the bottom of the container, leaving the thicker tomato on top. This saves a lot of time when cooking the tomato down to reduce to sauce. However, there is one caveat to this tip: as we learned towards the end of our tomato sprint, the tomatoes need to be blended fairly fine in order for this to work. At first we thought our tomatoes weren't separating because they were romas, and more meatier than beefsteak; but we found eventually that the more finely blended romas separated just fine overnight. You can remove the water by pouring off the tomato and leaving the water in the container, siphoning out the water from the bottom, or using a turkey baster. We used clear containers for our tomatoes so it was easy to see the water level.

Every year while canning, it is customary for me to sustain at least one scar-worthy injury. Last year, I reached behind a canning pot to grab a pear that fell on the stove, and got a harsh steam burn on my forearm that left a nice purple scar. This year, the Accident happened while canning tomatoes. I had boiled a large pot of sauced tomatoes until they reduced to about half, and added a generous mix of spices and onions and shredded horseradish root to make seafood cocktail sauce. After boiling, I was going to blend the sauce in cupfuls, as I had already blended two previous pots of ketchup, and return the blended sauce to the cookpot and then can in half-pints. I poured a cupful in the blender, clamped on the lid, cranked up the speed to 3, and in a hissing, steaming burst of red not unlike a catsup hand grenade, boiling tomatoes exploded all over the deck, the table, and me. I reached into the fiery inferno to shut off the blender and went into the house to lick my wounds and survey the damage. Overall, it wasn't too bad; my apron over my clothes had protected me with a double-layer of cloth, and most of the splatters on my arms were too small to cause much damage; however, my right hand had been the closest to the eruption by dint of the fact that it was the tool with which I had turned on the blender. It had a thick coating of tomato sauce and shredded horseradish, and when I rinsed it under cold water I could see the bubbling red tomato sauce would soon give way to bubbling red skin.

It is still blistered and bubbled, but surprisingly it never really hurt too bad. I did manage to burn the same hand twice more the following day - once on the thumb, and then across the palm when I grabbed a hot pan - but I don't think those mionor aftershocks will leave any permanent damage.

All things considered, the cocktail sauce turned out spicy and delicious, and I can't wait to enjoy it with home made fries and Mr. H's fresh-caught seafood.


A last Useful Tip on tomatoes comes from a combination of lessons learned from pears and peaches, and the timeless Waste not Want not adage. I'll share the lesson about the pears and peaches in a subsequent blog, but for now I will share with you a jewel of a tip from tomatoes. Save aside the 10+ pounds of skins from blanching/shocking all of your whole and diced canned tomatoes in a bucket or something. Set up a blender and squeeze some of the water out of a handful or so at a time; blend for several minutes per handful, and cook the resulting sauce for a little (depending on how much water you squeezed out) to reduce to a thick, nutritious tomato paste. 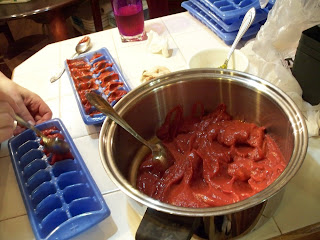 We had been planning to sauce a batch of tomatoes and cook them down for a billion hours to reduce to tomato paste, but this method works so well, uses the skins in a pertinent way, and saves time and money. Miz Carmen froze some of her tomato paste in ice-cube trays to freeze and vacuum seal later; not having the luxury of a spare freezer, I am pressure-canning my paste in 4-oz jars. 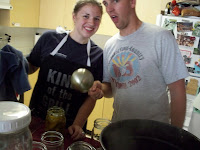