The above quote is dated from 1576, and is a precursor to the later 1772 version of "waste not, want not".  Who knows when the quotes were actually coined; these are just the earliest dates we have them recorded.  However, the concept is ageless and contains more than a morsel of truth.

I learned some clever tips for wasting not from some more experienced canning friends, and since they are such beautiful ways of using what would otherwise be food refuse, I want to share them with you.

In a previous post I mentioned that blending tomato peels makes an excellent tomato paste; in this post, I willl show you what to do with the peels and cores of fruit. 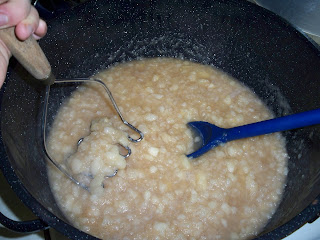 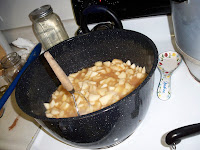 The other evening I made a batch of sweetened, spiced pear-sauce using about 20 pounds of organic red bartlett pears.  The sauce was delicious, and simple: peeled, cored, chopped pears, cooked soft, mashed with a potato masher, and just a hint of cinnamon, allspice, clove, and ginger thrown in.  Put into pint jars, process for 15 minutes like applesauce.  But what to do with the leftover pile of peels and cores?  Waste not!  Depending on the tools available for your use, there are two ways of going about this.  I'll give you the optimal method first.

Taking my cue from Miz Carmen, I borrowed her steamer-juicer and set it up on my stove while I made the pear-sauce.  I piled the peels and cores in the top, put boiling water in the bottom, and let it percolate for an hour or two.  The juice that steamed out of the peels I reserved in a half-gallon jar, and then boiled with a little sugar and a bit of lemon juice.  I added two boxes of no-sugar pectin, and jarred it in 4-oz and half-pint containers.  Voila - pear jelly!  And the heap of hot, steamed peels with all of the flavor and goodness extracted were still good for composting.  Waste not! 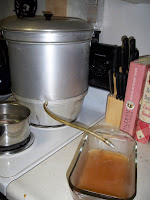 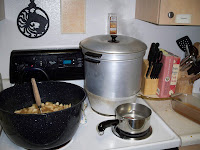 If you don't have access to a steamer-juicer, here is the second option:  Put the peels and cored in a saucepan with a little water; let them simmer and bubble for a while.  Pour into a mesh strainer over a bowl and mash out any juice.  Then, make into jelly per the instructions in the pectin box or as directed above. 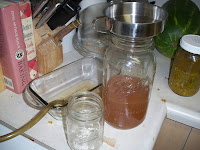 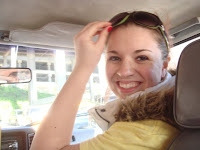 Off to enjoy some jelly on my toast!