Mr H and I live in an apartment; about a month ago, the leasing office told us they were going to raise the rent a great deal (for the second time this year) and start charging us for our parking spot.  They would brook no argument and refused to make a compromise, so after meeting with them again to ask if they would reconsider the amount they were increasing and being told "no, here is the notice to vacate if you want it," we decided the time was right to find more affordable housing.

Actually, Mr H decided.  I was fine with his decision; until I woke up the next morning and realized that we had to move.  I had nothing against moving in and of itself; I was just crushed to realize that, since we have been blessed with a kitchen with unusually large storage space and every new apartment we were looking at was incredibly small, I would probably have to put all of my precious dishes and canning equipment in cold storage.  You probably don't have to be reading this blog very long to know that cooking and baking are fairly essential components in my life!  I would think, "Oh, I can make do just fine!" and then I would wake up in the middle of the night and think what a miserable time it would be.  I had spent exactly one year learning how to creatively make everything fit functionally in our apartment (they aren't built for canners or long-term food storage!) - I had spent days agonizing over the storage shed and rea-rea-rearranging shelves until things fell into place perfectly.  To me, organization is critical.  It's much the same as breathing to some people - can't live without it!  I can feel in my bones when the shelves are organized properly, and I can feel in my bones when things haven't quite settled - I went through several kitchen organizations over the period of a few months before things clicked into place perfectly.  Mr H helpfully proposed to me that I could "rearrange the shelves at the new place."  I was frustrated with his response - no pity for me?  No sympathy?  "You don't understand!" I said.  "It took forever to make things fit ... the kitchen is finally organized how I want it!"  I was happy to move, but I was unhappy to have to change.  Didn't he understand that?

Ladies, this is the part where I re-learned something pretty basic that we all know about men.  Something I knew in my head, but needed to learn a little more about.

I was driving home that night and listening to a Christian radio station.  Shaunti Feldhahn

was giving a talk and describing my situation in detail!  She told me very clearly that what I was telling my husband - unintentionally - was that I didn't respect him.  And men need respect!  The Bible tells men to love their wives, and for wives to respect their husbands.  Pretty simple mathematics there.

In fact, Shaunti explained that in a cross-cultural study, they had found the overwhelming majority of men would give up feeling loved in exchange for feeling respected.  That's how important it is!

I don't think any of us would argue with that fact.  What I realized was that my complaining and worrying about moving was not translating to Mr H as a concern over "moving" but as a lack of trust in his decision-making abilities.

I agreed with myself to not whine any more about moving, and to show my complete trust in his decisions (he has always made the best decisions for us!).  Life went on, and we kept exploring new apartment possibilities.  The apartment we had looked at just prior to My Realization was an okay fit for us, but we really wished we could have had the end unit - unfortunately, it was already rented out.  Part of a 4-plex, it had a huge back deck perfect for canning and keeping a large freezer, two sliding glass doors, a spare bedroom, lots of storage inside and underneath, a fabulously open kitchen, and extra closets in the house.  "If only ..." I thought.  But I had already decided to stop whining and to rest in the capable hands of my husband and my God.  So I prayed about it that night and shut up.

The next morning, the landlord called Mr H and told him that - unexpectedly - the couple that was planning to move in to the end unit had cancelled their agreement.  Today we signed the papers and we are moving in! 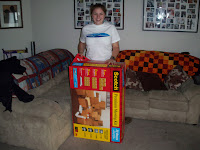 Answered prayer?  I think so.