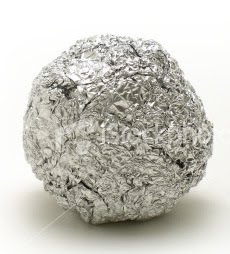 He who throws foil away should not be surprised when he runs out. Thems as don't work, don't eat.

So when I pop open a jar of canned goods, one thing that always galls me is having to throw the little metal lid away.  When you can a thousand or more jars in a year, the cost and the waste begins to add up! 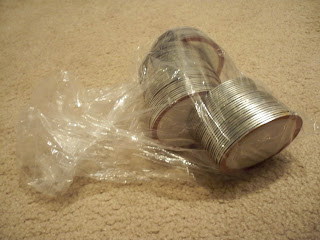 Now, I do save some of the lids for washing and reusing for storing jars of beans, leftover food in jars, and the like; but let's face it, I don't need thirteen thousand spare lids!

The waste factor, coupled with the fact that every year I have to go out and buy cases of new lids for canning, are why I was so thrilled to stumble across the Tattler Reusable Canning lids, as reviewed on another home-canner's blog.

As soon as I found their website, read through the reviews and comments by other users, and found out what their product was all about, I wrote them a letter asking for some lids to sample on the blog for all of you.  They immediately shipped me some lids - regular mouth and wide-mouth - and I set to work canning once again to try them out!

The tattler lids are made of white plastic, and BPA free - particularly useful when canning tomatoes, pickles, and the like, which can react poorly with the traditional metal lids.  They also have a thin rubber ring, instead of the familiar one-piece metal-and-rubber lids I used to use. 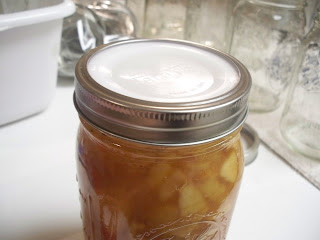 There is no heating or warm water involved in softening the rubber, which is a convenience (traditional metal lids must be heated before used to soften the rubber rim).  The rubber is set on the ring, the plastic lid set over it, and then the lid held in place while a traditional ring is screwed tightly on (these do NOT come with the Tattler lids, but I have scores of them from other jars).  The ring is then loosened one-quarter of an inch to allow air to escape, and set into the boiling water bath and canned like any other jar.

I went ahead and put mine right to the test - I canned some with apple-pie filling in boiling water, and some with pumpkin cubes in a pressure canner for an hour!  The lids withstood the pressure just fine. 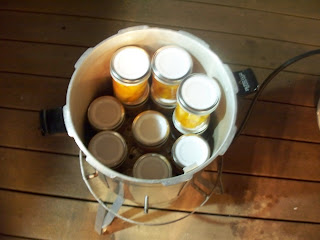 Extra effort! Once removing the jars from the canner, I followed with another step NOT used with metal lids: I tightened the rings fully, to close that quarter-inch gap.  Somebody commented to me that this involved additional work, and perhaps I'd rather use the metal lids to forgo this extra step?  In response, I simply say that instead of going to the store to buy a jar of food, I am willing to grow, harvest, wash, peel, prepare, and can my own food - one last task of tightening a ring around a jar is not beyond my capacity!

Did they work?  All of the jars I canned with the Tattler lids sealed perfectly (they suck down when sealed correctly in the same way as metal lids do).  Upon opening them some days and weeks later, I have found no problems with the food.  I washed the lids and put them in a box in my cupboard - ready to go onto jars next year, and the next, and until my daughters pry the lids from my cold dead hands!  The lids come with an assurance that, when used properly, they will last a lifetime or Tattler will replace the lid! They have never had to replace any lids.  The lid prices are reasonable, and you can save some percentage of the cost by buying in bulk (most canners are well-acquainted with this principle!).

Metal Canning Lids: A box of a dozen canning lids averages about $2.79 in a grocery store.  You can get them somewhat cheaper by buying in bulk, through co-ops, waiting for spring sales, and scoring random deals; but, on average, a home canner will pay about $2.50 for a box of a dozen lids.  Divide the two fifty, and that comes out to $0.21 a lid.  You use the lid once, and throw it away.  Over the years, that will add up!  If you can a hundred jars in a year, that will cost you nine boxes of lids, since some probably won't seal and you have to buy in units of a dozen lids.  That comes out to $22.50 a year.  Not too bad, you say? Now imagine that you can a thousand jars in a year, a number that is probably below-average for most canners.  This comes out to about $210.00.  You might get some better deals, so the cost could be reduced a bit, but in the end you will be throwing pretty much all those lids away by the end of the year.  Over, say, twenty years of canning, you'll spend a grim $4,200.00 on disposable lids!  (And add a hefty pile of trash to the local dump!) 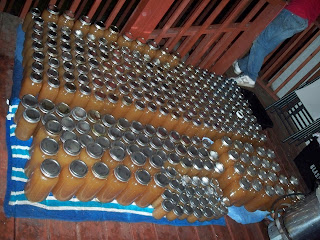 Plastic Reusable Lids: Now, imagine you bought a pack of three dozen reusable lids.  That'll put you out $20.95, about $0.58 a lid.  The cost is already double the metal lids!  That sounds outrageous, you tell me.  But say you went all out and bought 1,500 lids, for a cost of $789.75.  The price dropped marginally to $0.53 a lid.  Now, recall that you can use these lids for twenty, thirty, fifty years!  Instead of spending $4,200 over twenty years, your cost will be a simple fixed $790!  Plus, you won't be rushing out to the store every time the lids go on sale, panicking when you go to can your cider and find you ran out of lids, and wasting all that gas shopping around!  If you canned for fifty years, you'd save a good $10,000 on lids alone! 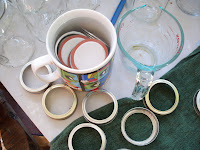 Always on the lookout for ways to save,