No Room at the Inn

There we sat, the faithful Seafoam and I.  We had pulled off I-90 at Wyola, a dinky exit just inside of Montana with nothing but a cattle-guard and an arrow pointing back up towards the interstate. 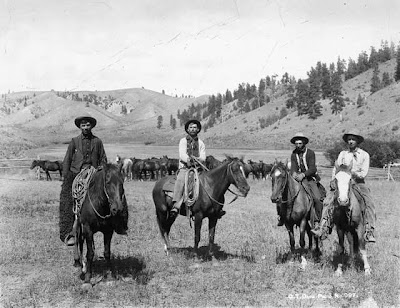 We whipped out our trusty map and our handy AAA tour guide.  We started calling hotels in Hardin, a town about an hour northwest of us, and the first one we reached told us they were booked up.
Hmm, I thought.  If they were full, chances were something big was going on and everyone else was booked up, too.  So I asked, "Is everyone else booked up, too?"
The receptionist was apologetic.  "Everyone is in town for the fair in Billings; it starts tomorrow." Billings was another 45 minutes west of Hardin, almost two hours from us.  "I'm guessing," said the receptionist, "that the next town that might have an open room is Columbus."  Columbus was yet another 37 miles past Billings. 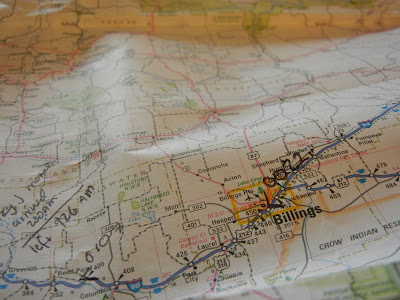 We called Columbus, and the hotels there informed us that there was no room at the inn.  "Try Big Timber!" suggested the cheery voice on the other end of the line.

I chuckled to myself.  I didn't mind having to push farther into the night; it was just getting a little ridiculous!  Big Timber was over 80 miles past Billings - a cumulative 188 miles from where we were sitting!

I called a motel in Big Timber, finding the number in my helpful guidebook.  The grandma who answered assured me that she had two rooms left.  "Everything's full up out here," she said, "what with the fair, and the Sturgis run, and the oil spill crew."  I didn't even know there had been an oil spill.  "Our regular office burned down, so we have a temporary office in the motel.  Just knock on room 13 real hard when you get here," she said, "which should be about 1:30 AM, if you're coming from Wyola."

By now, it was a quarter to midnight.  I slammed the tour guide closed, wadded up the map and crushed it in Seafoam's lap, and snapped off the overhead light.  "Seafoam," I said, "she just gave me Montana driving speeds, not legal driving speeds.  Two hundred miles in an hour and a half?"  The 150-horsepower Kia roared majestically up the hill back onto the Interstate.  "We'll make a run for it!" I said.  "You're not tired, are you?"


Seafoam was full of energy, as usual.  "Heck no!" she said.  "We have husbands waiting to see us!"

As we sailed through the black night under a spreading wave of stars, we rolled down our windows and leaned out, screaming the words to a pop song as loud as we could.


Today I swear I'm not doin' anything, nothin' at all!
We powered through Billings by 12:30, but Kami was starting to succumb to the siren song of the Sandman (I know, I'm mixing my myths, but that happens late at night).  She curled up against the window and fell asleep and I turned on a CD.
I rolled down the windows.
I slapped myself in the face.
I sang loudly.
I stabbed a Quality Inn pen into my leg.
Road signs became a thing of the past as we ascended the foothills of the Rocky Mountains.  My blurred eyes scanned the roadside for anything indicating how many miles remained until Big Timber, but nothing appeared to give me any signs of hope. 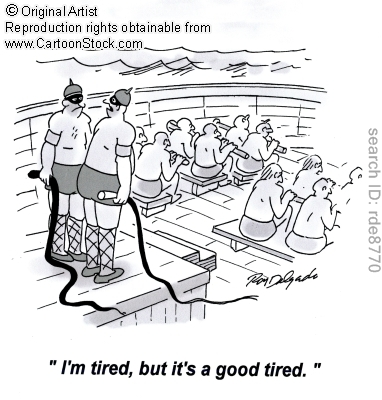 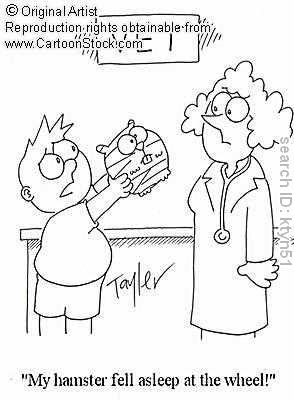 I couldn't remember my mileage at the last sign for Big Timber, but in my foggy mind I thought maybe it was another 50 miles.  I saw an exit for Graycliffs indicating lodgings were available, and we staggered off, trolling down the hill onto a tiny one-lane main street.  Four buildings lined either side, and a shrimpy RV park nestled to one side.  Criss-crossed over the street were strings of bobbing white lights, gently swaying in the night breeze.  Not another car or person was in sight.  There was no hotel that I could see.
Reawakened by my interesting but fruitless side excursion, I logged back on to the interstate and seconds later, passed a sign telling me that Big Timber was 10 miles away.  I cheered internally.
We limped in to the motel parking lot by 2:30 AM.  I checked in and woke Seafoam up.  She wobbled into the room and took one look at the colorful quilts on the bed. "This is very festive," she mumbled. 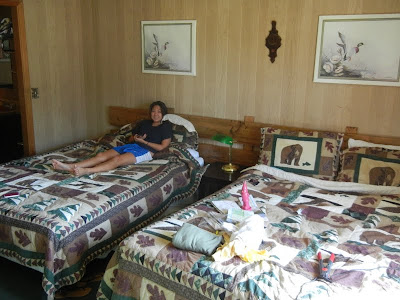 She promptly fell asleep.  I, on the other hand, didn't.
Mrs H
twitter.com/_mrs_h