There is always a sadly short summer in my native Pacific Northwest, followed quickly by a delicious and crisp fall.  Pumpkins, frosted fields, ruby-brown leaves, the whole bit.  We're in California now, and there is no pining for summer here. We pretty much live in summer.  So much for pumpkin pie, eh?

It's rainy and cool out today, though, so I am happy.

Now that the hotel days are over, where am I living?  For now, in a sweet little one-bedroom apartment.  In the days leading up to finding and moving into said dwellingplace, I would every so occasionally remember that I would soon have a kitchen of my own again ... and I'd get butterflies and chills just thinking about it.

Cyclists need to cycle.  Sculptors need to sculpt.  Musicians need to musish.  I need to bake!  I need to cook ... I need to chop and dice and knead.  I have to wash dishes and sort vegetables and sweep.  I need to be in a kitchen!


Settling in to the kitchen, I immediately got to work turning my mind to learning, experimenting, and exploring in my new little domain.  I had read on Gina's blog about how she made some liquid hand soap for her home, and since we didn't have any hand soap I decided to give it a go.

You will need:
1 bar of soap
Water
1 shredder or knife to chop
Pot to heat
Bowl to stir in
Spoon to stir with
Note: While you're here, you can get as creative as you want, depending on the soap you use, and add essential oils for scent, glycerin, or honey.

You can use homemade soap or store-bought soap; I used a 50 gram loaf of faintly scented hotel soap since I was trying to avoid a trip to the store! 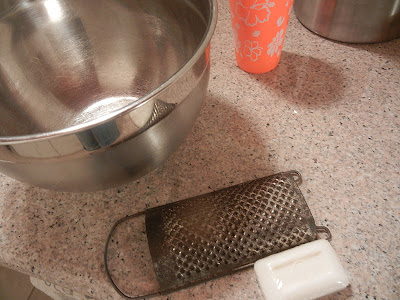 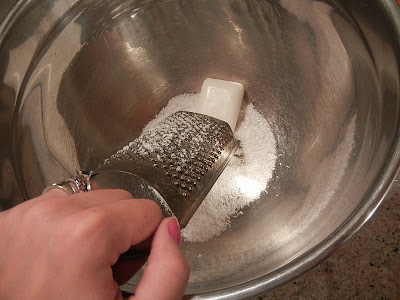 1. Shred or chop the soap.  I shredded mine late one evening, and then left it sitting on the counter to work on in the morning. 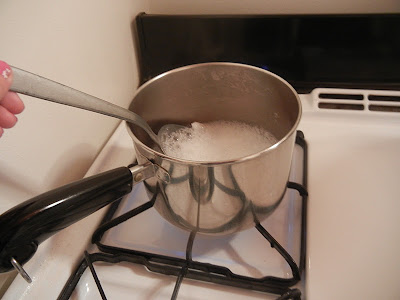 2. Boil some water and add the soap; stir and simmer over gentle heat until it fully melts.  I transferred the melted mixture to a bowl because I only have two pots (one small, one large) and couldn't spare one for the several days it would take to make soap! 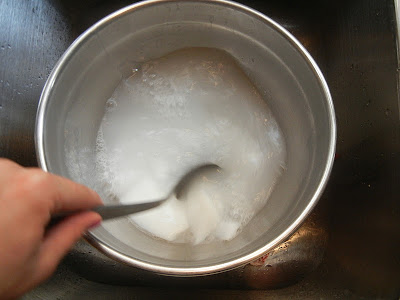 3. Let it cool overnight or for a long period of time, undisturbed, to see how much it will firm up.  You will probably need to add more hot water.

Like Gina, I wasn't sure how much water I would need so I didn't start with very much - maybe a quart.  I set it aside and checked it the next morning while I was making breakfast; it was thick and firm, like extra-jelled Jell-O.  I added more boiling water and stirred until all the thick chunks dissolved. 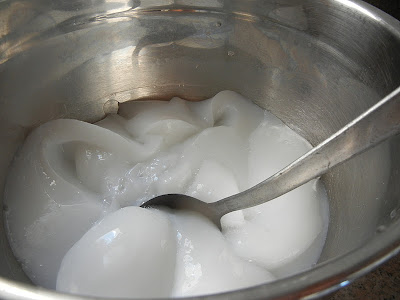 Over the course of several days, whenever I remembered it I would check the consistency and stir in more boiling water.  In the end, I used a total of eight quarts of water before it stopped firming up.  You can make your soap as thin or thick as you like, so long as it still pumps through the soap dispenser.

The reason I suggest letting it cool overnight or all day, without stirring, is that a little bit of stirring can break it up and it will appear to be deceptively thin, when if you had let it sit, it may have become too thick to squeeze through a pump. 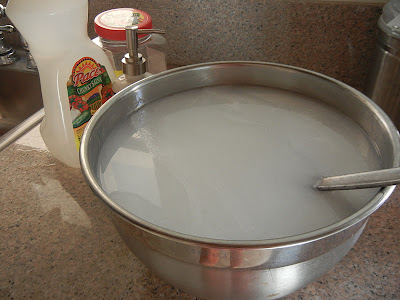 The soap did not separate, and I let it sit for several days because for one, I put it under the sink and forgot about it, and for two, I want to be sure it wouldn't harden or separate!


You can reuse any soap dispenser, but I happened upon this cute one with an "H" on it for $4.  I thought it a worthy splurge! 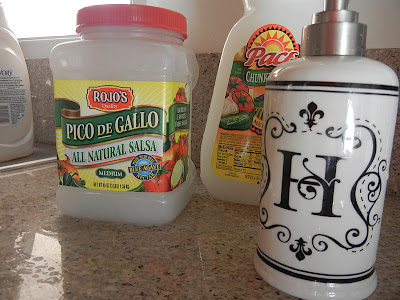 My two gallons of soap were essentially free, since I used a bar of soap I got at the hotel (even though I of course had to pay for my stay!).  But, a bar of soap doesn't cost more than one or two dollars and may be even cheaper if you made it at home yourself, or even received it as a gift.

At Costco, you can buy individual 7.5 ounce containers of liquid hand soap for $1.89 apiece.  If I were to buy enough to make up the two gallons of soap that I made (a little more than thirty-four bottles), it would have cost me $64.50!  Of course, I could be very economical and buy the one-gallon containers of soap for $10.26, but that would still be a total cost of $20.52, and I didn't need to spend anything to make this soap.

I have several jugs of soap now, and I can use those to refill shower bottles for body soap.

Let me know if you try making some hand soap, and what bar of soap you used and how much water it took in the end (if you can remember!  I knew that my bowl held just over 8 quarts, so that was how I measured mine.  And, I weighed my bar before shredding it).

Keeping it clean in Cali,

P.S. What other delightful mix-ins can you think of that would easily blend into liquid soap?