So You Can Know ... the Rest of the Story

To the supportive readers who have promised to love me no matter what (you did say that, right?),

I received enough comments and text messages from my last post to convince me I needed to either post the rest of the story, or quit blogging.

Obviously I didn't decide to quit blogging, since we are reading this right now.

So, I'll finish the story that I began.  First, allow me to preface this with the disclaimer that nobody should do what I did, and that being sleep deprived and tired will make you do bizarre, stupid things, and the fact that I am writing this story here does not mean I promote such rash actions or would even fully admit to doing so if questioned in person.

The bold author would like to be remembered as more intrepid and adventurous than wise and intelligent.

When Seafoam and I were racing to the rescue with pizza, we were laughing and joking to each other about how "this would make great stuff for the blog!"  How lighthearted and carefree we were, in retrospect!  As the night wore on, however, we changed our minds.  "This," we said to each other, "will never be on the blog.  We'll be in way too much trouble."

But I am just stalling, so let's cut to the heart of the matter.  Remember how we were laying in the darkness of the hotel lobby, the power out in two states and two countries, no hotel rooms available for the night, wondering what our fate would be?  Take yourself back in time ...

Seafoam was sprawled out on a couch a few feet away, and I was tentatively slouched on the other one, debating what I should do if the power were to come back on, while the ladies at the concierge desk discussed whether or not they had the gumption to kick us off the couch before they got fired.  You may remember my exact words:

I had unfolded my towel for a blanket but now I was prepped to be kicked out of the lobby.  I folded the towel up and set it under my purse, half sitting, half leaning against the arm of the couch.  Ready to run, if necessary.  Now, I will finish the story that I so vaguely abandoned.

In the blackness, and over the beeping of the emergency alarms, I heard Bill walk in.  Bill is the maintenance man for the hotels - he's pretty old, lives close to the hotel, and is always standing at the front desk talking with his girls, as he calls them.

He reported that the power had come on at a city about ten miles down the road, and it should be back on at the hotel within an hour.  I felt a little nervous at this comment!

"Those girls are sleeping on the couch," the women reported to him.

He seemed mildly surprised.  "Why are they sleeping there?"

"We can't get them rooms," the ladies stated.  Their conversation took a snarky turn.  "And they're going to wake up and assume we have rooms for them, but no, we have no more room."  A Navy ship was due to arrive in the bay the following morning, and many of the sailors' families were in town.  "We are one-hundred percent booked!" 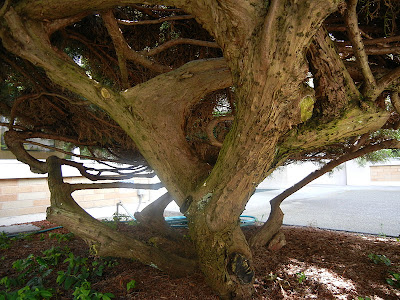 None of our phones had reception due to the power outage, but I wished I could text my husband and update him on our status.

One of the ladies expressed how tired she was.  "You could go up and lay in my room," Bill suggested.  He had an early shift and had booked a room for the night to save himself the trouble of driving in, but I realized he apparently wasn't planning to use it.

She declined and they all went on to discuss how nice it would be to have pizza and soda.  I was momentarily considering bringing in the leftover pieces of Costco pizza from the car to buy their support, when there was a bright flash and all the lights in the building came back on.

"Woohoo!" the ladies cheered, dancing behind the desk.  Seafoam stirred and came to life, sitting up groggily, groping like a fresh-hatched chick in the garish fluorescent light of the lobby.

I saw Bill approaching me, his dozen keys jingling at his belt.  "Do you girls have a place to stay for the night?" he asked.

"Oh sure," I bluffed.  I wasn't going to fall into the trap and 'assume they had rooms.'  "We'll probably drive into town and see what we can find."

He seemed concerned.  "You know," he said, "I have a room here and you girls can just stay there for the night."

And so we come to the pivotal moment in history where I have the option turn into a bad example for future generations.  Memories from childhood drifted through my mind like dead flies floating downstream.  Don't take candy from strangers ... Don't sleep in a stranger's hotel room ... My eyes were heavy, my bones were heavy, and my head was swirling.  I glanced over at Seafoam, her huge dark eyes soggy with sleep.  She blinked.  It was a desperate situation, but would I really agree to sleep in some random man's room, some fella I had never clapped eyes on before this moment?  That would be a move far too ridiculous for my ultra-conservative behavior.  I looked back at Bill.  "Sure," I said grandly.  "If you don't mind, I mean, we can always drive in to town ..."

"No, no, just stay here!" Bill insisted.  I stood up and picked up my purse and the folded towel I had been sleeping under.  Well, if he wasn't going to use the room anyway, there was really no reason ... "I'll just sleep on the chair," he said.

Eesh, I thought to myself, too late now.  And honestly I was so tired I really didn't care any more.  Anything to get the desk ladies off my back.

We went upstairs, the desk ladies trying not to look like they were gawking as we went by.  Inside the room, Seafoam tottered onto the bed and I sat next to her.  Bill settled himself in the chair, still in his working uniform, and put his legs up on the ottoman.  I sat on the edge of the bed and talked for an hour with him - he seemed to have endless conversation and was eager to tell me about himself, which was exactly what I wanted.  I plugged my useless cellphone into his charger, which he offered upon hearing that my phone was nearly dead.  Not that I could have used it if I needed it, but the only outlet was on the other side of the room and nowhere in reach from my position on the bed.

Who am I kidding, I thought to myself.  I'm staying in some strange old man's room and at this point, nothing is really going to improve the situation or be "smart".  But I listened to his stories and asked questions until I could finally hold my head up no longer, and then I crumpled next to Seafoam and fell into a fog of half-awake, half-asleep, jolting alert at the slightest movement in the room.

Like when I woke up around two o'clock to the sound of him taking the spare blanket out of the closet, and then watching through barely slitted eyes as he unfolded it and threw it over Seafoam and I.

By the time I woke up I felt like I had been in a train wreck.  He told me, "I woke up in the night and you girls looked cold so I put the spare blanket on you!"

Bill put on his cap and left for work sharply at seven, and Seafoam and I went downstairs to check in to our own hotel rooms.

I'd hoped the desk personnel would have changed by morning but the desk ladies apparently work 24-hour shifts, and curiously asked, "Where did you stay last night?" 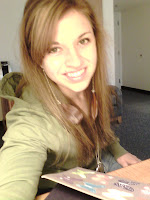 "In Bill's room," I nonchalantly stated.

That is our insane story, without the family-size edits.
Still alive to tell the tale,

FTW, when Seafoam told her husband "we slept in the maintenance man's room," he said, "You slept in the broom closet with the buckets and mops!?"

When I revealed our horrific story to the Navy boys, I was gratified to see their eyes bulge in shock and horror.  It takes a lot to impress them but apparently I managed to do so.

And for the record, I'm not going to try that again.