To the adventurous and the steady,

Happy New Year!  Ever Since Christmas, it's been a busy few weeks!  Mr H and I planned a surprise visit home to see our families for Christmas. 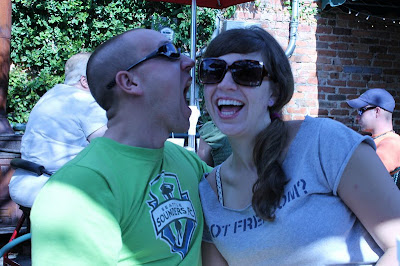 My mom knew - she planned a casual family game night the day we were due to get back in town so everybody would be there.  Mr H's parents couldn't be there, so we drove up to their house first.  After creeping stealthily across a frosty field in pitch black night, we knocked on the front door and greeted his surprised parents!

After visiting and taking some pictures, we headed up to my folks' house where the party of unsuspecting family members was in full swing.  Mr H was, of course, wearing his Navy dress blues, and two friends who had helped us put together the plot were with us.  We parked off to the side of the house and snuck up to the front door.  My mom had ensured that it was slightly ajar so it wouldn't be locked, and we marched inside and straight into the arms of a screaming, shocked family!

I could barely catch a breath as I was overwhelmed with people flying at me, bowling me over with hugs, my little sister clinging to my legs!  There's nothing quite so fun as coming home, and it's only made more exciting by coming home on a surprise visit!

A friend took a picture of my parents and my siblings and I, to record the moment.  Mr H stepped out of the picture so my Dad could send it to some friends on the missionary field who were curious to see how many kids this American family had.

Mr H and I had one more special surprise up our sleeves, and Mr H thought up a creative way to show the family.  He got everybody to sit down and stop chattering for a moment, and then presented me with a shiny Christmas-wrapped box.  I opened it while everybody wondered aloud what was going on, and pulled out a little bitty shirt. 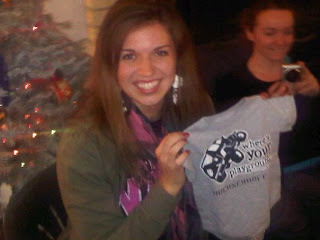 Chester (behind me in the picture above) said later that she looked over at Mr H as I was pulling the small shirt out of the box.  He looked, she said, the same way he looked when I came down the aisle on our wedding day. 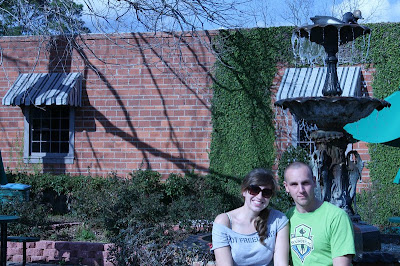 And so begins the next wonderful adventure of our lives, and a new entertaining topic for the blog - pregnancy!

I will briefly answer the two most common questions I am currently receiving!

1. We have not settled on a name, and will not reveal it before the birth anyway!  And we do not know if it is a girl or a boy and don't plan to find out.
2. I do not have any particular cravings, but I would agree with the Mysterious Mrs S that if I were to say I crave anything, it is probably water!  I still desire the same foods I always want, and I am slightly suspicious that most 'pregnancy cravings' are just an excuse to eat whatever we women want!  (And that sentence was just an excuse to alliterate W.)  [Don't hang me, fellow-preggies - I did say most, not all!] 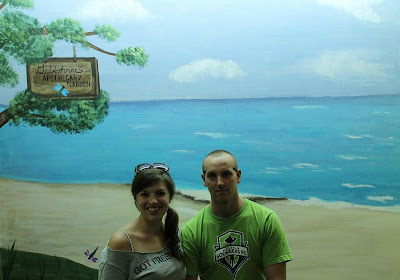 And now, to adventure off into the New Year!