As many of you know, I am a participant in the choir at my church. When my family first started attending Cedar Park Church, I was only seven years old. I remember watching the choir sing on Sunday mornings and being impressed with how organized they looked when they filed onstage (I later learned that there was no organization whatsoever to the lineup...). I joined the choir for a Christmas concert when I was 15 years old, loved it, couldn't leave, and have had the privilege of serving under several talented and godly choir directors for the past seven years.

Joining choir changed my life. It gave me a ministry outlet when I had none, and brought me into participation and involvement with the church. I learned about the importance of worship and the significance of personal ministry. Joining choir connected me to a network of friends and prayer partners, a familiar group of people who could lift me up in prayer when I needed it and whom I in turn could lift up in prayer. The first person I met in choir, Hanna-Mari, became a close friend and was always there for me, even helping to save the life of one of my own friends. And the memories I have of choir are many and precious! The organized chaos of crowding into the wings for Easter performances, sweating under a camel costume with my sister, late nights at practice for special events, the hundreds of Wednesday and then Thursday night rehearsals, CD recording projects in the chapel, and Pastor Lane's entertaining choir Sunday school.

The choir isn't only here to entertain (although sometimes, with plays and concerts, we do just that!). The choir is here to lead God's people into His Presence. Every time we sing, it is with prayerful spiritual and musical preparation - often in the face of tough spiritual warfare - with the intent of creating an atmosphere of praise. I have always thought of the choir as performing a Biblical, priestly duty. In the Bible, it was the head leader of the Levites, Kenaniah, who was the choir director (I Chron. 15:22). The Levites were the priestly tribe of the Israelites, and their duties were holy and sacred. They were set apart by God to carry the ark of the covenant - His Glory - to lead the Israelites, and to minister to Him and to bless His name (Deut. 10:8). The ark preceded the people in battle, in travels, in worship. The choir performs this duty in church - leading the congregation of people to the holy place, taking part in spiritual battle, and ministering to the Lord with worship and praise.

Many of the Psalms, and a prayer in Habakkuk, were written for the choirs to sing (and we still sing many of them to this day!). Nehemiah 12:46 says that "the custom of having choir directors to lead the choirs in hymns of praise and thanksgiving to God began long ago in the days of David and Asaph." Nehemiah also tells us that after the new wall of Jerusalem was built, choirs were sent to the tops of the walls to dedicate the structure and give thanks, illustrating the importance of their thanksgiving to the Lord. In Revelation, it is a great choir that sings before the throne of God, and in Luke, it is a heavenly choir that announces the Savior's birth to the shepherds.

Attending every rehearsal and performance is important to me, because it isn't just singing in choir, or hanging out with church friends. It is a sacred ministry, which should be performed with dedication and purpose. No time is wasted when we are furthering His Kingdom, and giving Him honor. No time is wasted when we are leading people closer to His presence, and blessing the Lord. 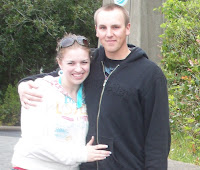 Don't try to talk me out of missing a rehearsal or a Sunday morning service by saying it isn't important, or it's "just" choir ... because this is "just" my ministry to the Lord, this is "just" my pearl of great value.

Mr. H is Joining the Navy

Many of you may have already heard the rapidly spreading news that Mr. H and I have made public his decision to soon join the United States Navy. When I originally set up this blog, it was with this pending decision in mind; I wanted to have a blog site where I could continue to update everybody about life as a navy wife, Gary's progress through training, and the lessons we learn on the difficult road of being apart and far away from each other. Mr. H and I discussed this thoroughly and deeply for the last year, and have only recently confirmed our decision and subsequently revealed it to family and a few friends.

We made it a priority that before he left for anything we would have been married and together for a minimum of a full year. This was a Biblical mandate for the Israelites, and we felt led to follow this restriction in order to develop our relationship and to have a firm foundation of marriage for when Mr. H must be absent.
"If a man has recently married, he must not be sent to war or have any other duty laid on him. For one year he is to be free to stay at home and bring happiness to the wife he has married." Deuteronomy 24:5, NIV

Allow me to quote a portion him so you can hear his own words about what he is going to do:

Ever since I was a young kid I dreamed of joining the Navy and serving my country as many before me had. It is a display of patriotism and undying love for God and Country, and I could never shake the idea of joining the military service.


If you have questions about anything, post them on my blog and we will answer them publicly so that everybody can see the answers.

it is the calling the Lord has placed on his life, and to disregard would be to sin. To pursue it, is to be richly blessed in the fullness of His Word.