These delicious cookies almost never happened – they almost became a costly tragedy!  Flying around the kitchen like a whirling dervish, sometimes the cooking bloodlust fills your eyes and you get going so fast you can’t see the corners as you go around them.  Pit stops for hand-washing between raw meat and fresh salad become blindingly efficient, scalding water and soap bubbles exploding, and onions are chopped and thrown into the pot of hot oil before one barely has time to find a knife.  And so disaster can happen in an instant, it can strike without warning.  But let me start at the beginning …

It was a bright, sunny Friday in fall, and Mr H and I were planning to have three or four of the guys over for dinner – and sometimes word spreads about these sorts of events and the numbers can grow without my knowledge, so I always have to be prepared.  It’s downright impossible for any social cook to turn away a hungry guest, and I didn't want to disappoint!

These guys were in training, and with all their physical exertion could easily put away a ten to twelve-thousand calorie lunch (that’s the equivalent of five or six Red Robin burgers) and I’d seen them sit on my couch and inhale tottering stacks of thick whole-grain pancakes without blinking; so dinner had to be something more substantial than milquetoast and tea.  I got up early and started my preparations: I had come up with a list of dense foods that would all be relatively inexpensive to make.  We would have biscuits, meatloaf, mashed potatoes, roasted carrots, gravy, Caesar salad, homemade barbecue sauce, and a rich apple cake for dessert – a regular carbohydrate orgy.  And there would be plenty of each item!

Since I’m the only female around these parts and the guys could get off work as late as eight at night, I knew I’d have my hands full with preparations come evening.  I did as much in advance as I could.  After washing the kitchen down spic-and-span (I can’t cook quickly in a mess!) and making sure all ten of my dishes were clean, I mixed the dry ingredients for the biscuits in a bowl and set them on one counter with their respective recipe, forks to mix in the fat, and a cup of measured dry buttermilk powder.  On another counter I set up my stand mixer and, in a separate bowl, whisked together all of the dry ingredients for the cake.  I set the butter next to the stand mixer to soften, put the recipe on top of the bowl, and went about my day grocery shopping and cleaning.

Back home, preparations went into full swing.  It was early afternoon, and surprisingly the men were already off work.  My husband and two of the fellas settled in the living room eating a quickly-made lunch of soup and cheesy bread, busily sharpening knives, and I whizzed about the kitchen at full speed.  I beat eggs, sugar, all the good things for cake, and dumped in the dry ingredients.  The mixer slowed as the dough thickened – wait a minute – dough?  I screeched to a halt and stared into the bowl.  This was not cake batter!  I released the lock on the mixer and the paddle lifted.  Instead of a rich yellow batter dripping from the metal apparatus, a thick dough congealed about it in a massive blob. 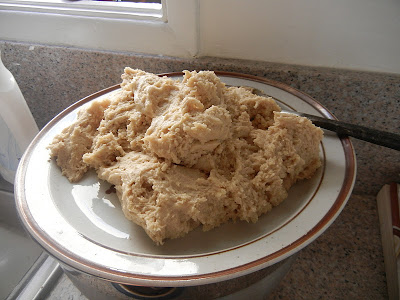 The dough stared at me reproachfully.
“No!” came my anguished cry from the kitchen.
My husband came in to investigate.  I was staring at the bowl in agony.  “What’s wrong?” he asked, as a mixer full of dough in my house is usually not cause for alarm.
I realized what had happened even as I stood there.  I pointed a trembling finger here, then there.  “I mixed the wet ingredients for the cake – with the dry ingredients for the biscuits!”
“Hmm, well …” my husband looked from me to the mixer.   In the living room, nobody else seemed to share my concern.
“It’s a waste!” I raised hue and cry.  Wasting food is horrible in any instance, but this was eggs and butter and sugar – expensive ingredients as ingredients go, and I hardly had enough to spare!
But the treacherous mixture had to be dealt with, so I started thinking.  The dough looked thick enough to stand in the oven, so I prepared a cookie sheet and piled on blobs.  I threw it in the oven at a random temperature and tried to regain my momentum, remixing all the ingredients for biscuits and cake.  The first pan emerged looking hopeful, and I broke off a piece and ate it.  I took a plate out to the living room.
“Would you like,” I said, “a biscuit-cookie?”
One of the guys gingerly picked off a corner.  “Are you sure it’s good?” he said warily.
“Oh yes,” I said.  “Eat it.”
He cautiously put the bite in his mouth. 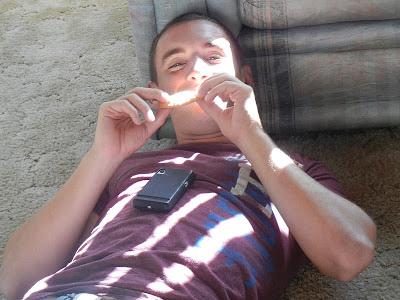 Moments later the plate was empty as they all cheered.  “You should sell this recipe!” one of them applauded.  “This is so good!”
Throughout the rest of the evening, no matter what was in the oven – meatloaf, carrots, biscuits – there was always a second pan of cookies baking.   My cookie sheet only held a few at a time so it took a while, and the temperatures ranged from 350 to a soaring 450. 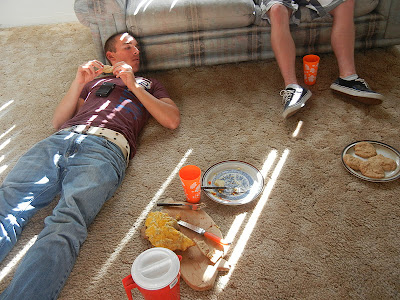 Butterscotch Biscuit-Cookies
These are especially good if the next day you toast them briefly in the toaster oven – they magically taste like toasted marshmallows!!!! The cookies are tender-soft, their flavor complex and mellow.  Even days later, they are still soft!  They freeze well, and are soft when they thaw.  I would guess this makes about 4 or 5 dozen – I do not quite remember how many I ended up with as they were eaten as they came out of the oven!

Set aside.
In a stand mixer or bowl, we will have the wet ingredients from a single batch of King Arthur Flour’s Legacy Apple Cake.

Cream together:
1 cup softened butter
1 cup light or dark brown sugar
1 cup granulated sugar
Beat in, one at a time:
3 large eggs
Mix in:
¼ cup cider or apple juice concentrate
1 generous teaspoon Mapleine (I used Mapleine instead of vanilla, which the original recipe calls for.  You can use vanilla, buttercream, or whatever flavoring you have on hand.  The Mapleline & brown sugar lends the cookies that decadent butterscotch flavor.)

Add the dry ingredients to the wet and mix with the paddle or a wooden spoon until just mixed.
Put generous tablespoonfuls on ungreased parchment paper (if it is greased, the cookies will spread too far in the heat and be thin around the edges).

Bake at approximately 350 degrees F for 8 to 12 minutes, checking for doneness frequently with the first batch.  Take them out while they are still soft, but browning around the edges and on top.  Even if they are over baked, they will stay soft – I know this because I forgot about a pan or two so a few cookies were very well done!

Serve to hungry boys or freeze.
Variation: Mix in peanut butter chips, or really any chip. 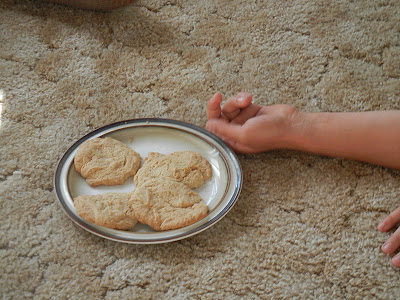 from tragedy to triumph,