I don't want to post the words here that we weren't allowed to say growing up, because that would defeat the whole purpose; but certain common phrases and nouns, no matter how customary they may be to hear out and about, have disgusting roots and are not necessarily edifying.

Other words are just to gross to hear, and people in polite company prefer to hear euphemisms than to be granted a visual of you engaging in some bodily impulse.  For instance, I much prefer to hear a person say, "Excuse me, I need to run to the bathroom, I'll be right back!" than to hear the uncouth, commonly used phrase where she describes the precise function she feels the urge to perform and then goes away, assumedly to do as she said she needed to do.

I feel respected when Mr H's co-workers make valiant efforts to stem the tide of expletives when I am around, and they sometimes come up with extremely creative ways to say what they feel they need to say without the offensive words.  Or they just say, "Earmuffs, Mrs H!"  Lately, a few of them have decided to replace all swear words with the names of various popular candies.  "Oh, skittles!" they might say.  "That's a Big Hunk loud song!"

It sounds uneducated to fill your language with curse words.  A truly educated person should, in my estimation, be able to come up with a wide variety of more descriptive nouns, verbs, adjectives, and pronouns to describe the world they are encountering; using the same swear word for all of these, whether out of anger or just in casual conversation, is demeaning to the listener and reflects poorly on the speaker. 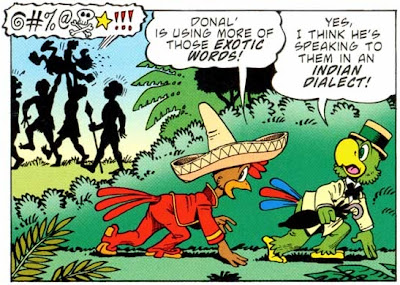 I was babysitting two of my favorite children a few days ago when the five-year-old exclaimed in surprise, "Oh, saddlehorses!"  I found this amusing; later when his four-year-old sister used an exclamation of "oh my gosh!" he reproved her and said, "say saddlehorses!"  She willingly repeated the phrase after him.  Since the parents hadn't mentioned any taboo words (I just assume all possible options are off the table when I babysit), I asked the kids, "Are you only allowed to say 'saddlehorses?'"  The older child shrugged.  "No, I just think it's more interesting!"  When their parents got home that night and the children were snoozing in bed, I asked the same question.  "You know," said their mom, "I really have no idea where that came from.  He just said it one day, and he's said it ever since!"  But out of the mouths of babes - it really is more interesting!  (On that note, I will add that it is not cute or clever when your three-year-old spouts out a swear word or mis-pronounces something that you immediately interpret as a swear word.  There's nothing cute about vulgarity)!

Some words, while not intrinsically bad, just take more explaining than you may be feeling up to at the moment.  A few years ago my husband had the unfortunate experience of using the now-evolved word "gay" within earshot of my little sister.  She, being five, asked what it meant.  Not feeling qualified to explain to her that it can be used to describe a different type of lifestyle or outlook, he went with tradition and said it means to be happy.  She ran around the living room joyfully, screaming, "I'm gay! Gay, gay gay!  I'm gay, gay, gay!"  My husband was mortified and my mom, bless her heart, managed to suppress her laughter and calm my sister.

How do you come up with rules for taboo words in your family?  (No, no, don't post a list of words you can't say!)  What do you do when one of the kids comes home from a visit and uses, perhaps innocently, some phrase you'd rather not hear?  How do you feel when somebody uses distasteful words in your presence, or conversely when they make heroic efforts to quell the flood of effluvia and speak with some measure of respect?