Growing up with seven siblings is unbelievably crazy and wild.  As my dad says, we have all boys and six girls.  How those two boys got in the mix I'll never know - probably an accident!  Six girls and two boys, ranging in ages now of 25 to 6.

We were homeschooled by our diligent parents, and so we spent a large part of our days studying and playing together at home and in our backyard.  I don't know what it's like to grow up without this close interaction between brothers and sisters every day, so it is only based on mere speculation and observation of other families on my part when I say that this was the primary factor that played into the close bonds we all have now that we are older and going our various ways.

Mom had some methods of child-rearing that might be found pretty peculiar by most outsiders.  You've all heard about separating the fighting children, right?  Well, Mom had a different method; whichever of the kids were not getting along at that time (let me just say right now I was usually one of these perps) would "move in" together.  Mom would rearrange the bedrooms until the fighting factions were forced to live together and duke it out.  Guess what?  It worked; other than the fact that we lost a few kids along the way, we are all great friends now.


OK, just kidding - none of us ever actually killed each other.  In all actuality, I think it was some of these early experiences learning to get along that helped engender the great interpersonal skills that all of my siblings seem to enjoy.  It's virtually impossible to find somebody that I can't get along with (I think I've met one ... okay, maybe two people ... that I would say were very difficult to get along with!) and this skill has put me in the position of mediator many, many times in the workplace.  I can't even count the times I was the one who had to go-between two warring parties in the office, translating messages and trying to smooth the problems.  Over and over in college I ended up being the only one who could communicate between arguing teams, or work with students to help them understand the teacher when they weren't getting along well.

Now, this was not always the case; in my ego-bruising early years, I was usually the one pulling my brother's hair or slamming the door, sulking in the bedroom or screeching at my sisters.  Ahem.  Praise God for grace and mercy.  Otherwise .... let's not go there!

Growing up, playing together as Indians in our pine-branch tipi or Pilgrims cooking pottage on the trailer hitch of the pop-up, we always referred to ourselves as "us kids."  "Hey, maybe us kids could go to the library..."  "What time should us kids be ready?"  "She said it was for us kids!"


People who weren't familiar with our household would laugh when they heard this expression and try to correct us, saying that the proper grammar was "we children".  Now it was our turn to laugh - first of all, we weren't children!  And that term didn't even compute - did not even convey the same message!

Us kids were a special, unique band.  Perhaps we didn't always feel particularly close to each other, but we were forging bonds of thick blood that would fathom years, and, I expect, many more decades.  The older we get, the closer we seem to grow; moments together are more precious, at least for me, the first of the kids to move out.  There is something close between sisters, more intimate and intangible than even a close friendship; there is something protective about the brothers, something strong and admirable that can only be outdone by the other two men in my life - my Dad and my warrior husband.


And indeed, there has been one person who entered this circle and became one of us after the last child was born, and that was my husband.  To illustrate his unique infiltration of our closed society, let me tell a little vignette: Ryan and Jessie are the fourth and fifth child in the family, and they have always been very close.  Their birthdays are one day apart, with two years of age between.  Jessie was Ryan's tomboy sister, and did everything from target practice to football with him. 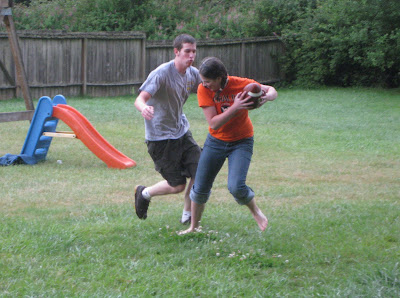 Then, early 2007 rolled around and I brought home a new player.  Jessie says she felt a little jealous when Mr H appeared and started spending time with Ryan.  This outsider, this usurper!  But before long, he was one of us and the circle expanded to welcome him.  He is one of those rare people that can walk into the house and instantly become part of the chaos; within moments he'll be up on the roof tearing the moss out of the gutters, or teaching Nathan how to fix the lawn mower; he'll be under the sink pulling apart the drain, or moving the furniture away from the walls to change the outlets. 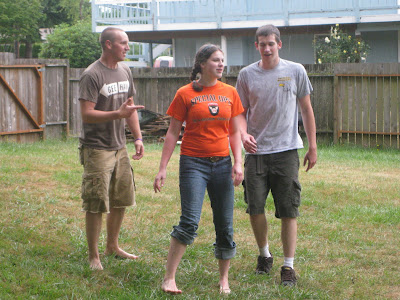 Of course, I can't help but feel a little partial towards him! 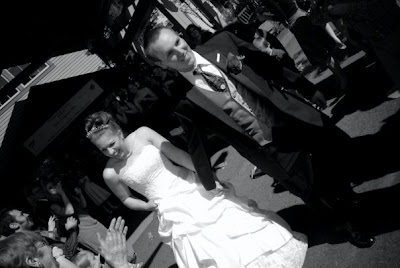 But in thinking about our growing up years, I realized the other day that I haven't said "us kids" in a long time, and I don't know if any of the other kids have, either.  The circle is broadening; the scope is expanding.  Soon to be separated into three different states and two countries as Reb studies piano performance in New Orleans, Mr H leaves for boot camp in Illinois, Jessie takes off for Italy with her college, and the rest of us stay at home - our physical locations will be far apart.

But we used to all live within a few feet of each other:

Rebecca and I used to play together for hours on end.  The scope of our imagination was limitless and we never ran out of things to do in the wild jungle that was our fenced backyard.  Best of all was when Dad would mow the grass and we could follow him in the trails left by the mower.  This game was even more improved when the grass was a foot tall! 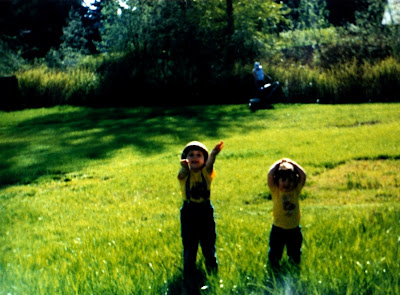 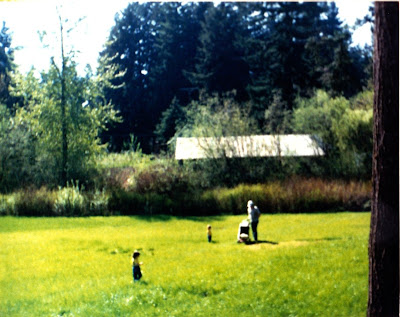 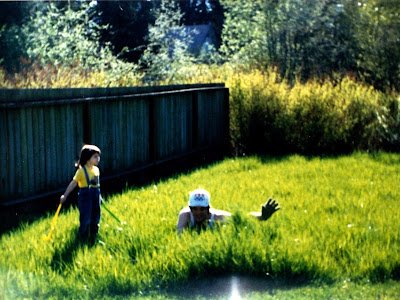 Melissa and I are the closest in age of any of the kids.  She was the bald-headed baby and then the blond-haired queen.  Rebecca and I built her a beautiful throne once - stacking up boxes, toys, everything, and seating her royally on top, high above the earth.  We then ran outside to play, leaving her stranded!
In our more cooperative years, Melissa and I used to muck around in the garden and make home videos of garden tips.  We tried to keep it politically correct, of course, as the dialogue in a clip now famous in our home reveals: "If you're cr - if you're feeling creative ..."

Ryan and Jessie, the rough and ready tomboys, will be embarrassed to hear me say that they used to play Huck and Tom (err.. Thome) in the back yard for hours on end, getting into various sorts of mischief.  Like riding their bicycles over the tomato cages to see what would happen.  Or towing a little boat behind the bicycle and riding across the pond - what happens when you get the string jammed in the gear and you have to stop in the middle?  Jessie can tell you all about it.  Now that he's had the time to mature a little, Ryan has graduated from designing egg factories (don't ask) and drawing stacks of hats, piston and gear contraptions, and rat houses (really, really don't ask) to studying engineering and as always making brilliant computations with his computer-like brain.  Jessie has awed everybody with her time management skills and early maturity, going above and beyond the call of duty in her job as a part-time nanny, working part time at a warehouse when they need help, and graduating high school early to jump into college classes and shock her teachers with her intelligence.

Amanda, now popularly known as the literature fanatic in our family, hasn't caused a lot of rioting - at least that I can see.  She's the mysterious one!  While she and I weren't real close in age growing up and usually had different classes and events to go to, she now joins me in the kitchen helping me create devilish delights to torture the dear reader with.  She is pleased to puzzle everybody else with her shrew-like wit and candid descriptions of real life.  Hopefully, we can talk her into writing her own blog one day.
Nathan was the youngest for a while; the second boy in the family, he has made a name for himself as being incorrigibly creative and clever.  He attended a quarter at the university with me, riding his bike the ten miles there and back every day beside me on the trail.  He was such a thrill for the teacher - she couldn't get over his cleverness, and she found him to be the most adorable creature she'd ever met!  He left her a note on the last day of class and a year later she emailed me that she still had the note on her desk.  She was impressed at how he could be so well-behaved and intelligent - that's my brother!  In his spare times, he writes short stories about Winston Worm, and creates computer programs like the Educational Hedgehog. 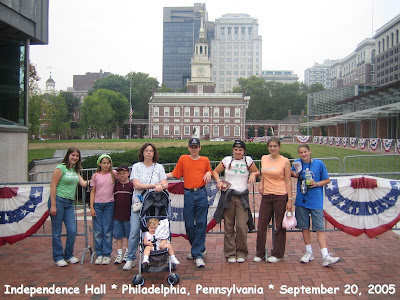 Karissa, known as Kej or Kejmo, is the youngest.  She was the child whose feet never hit the floor until age two ... with that many older brothers and sisters, she was still such a novelty that everybody was constantly clamoring for a turn to hold her.  And believe me, it is not a bad thing to hold and cuddle a newborn babe - they are not going to be overwhelmed with your love!  There are seventeen years between her and I but that doesn't keep us from having a special relationship - she loves to cook with me, go to fun places, explore, read her books.  And as she grows older, I look forward to traveling with her, having her spend the night at my house, and one day she can babysit her nieces and nephews for me!
Who could pass up an opportunity to enjoy family life this way?  And all of this completely aside from the fact that all the kids scored off the charts on national assessment tests all during school, and are taking home 4.0 GPAs and the admiration and praise of all their teachers at the college, university, and masters level of education; that is just a symptom of a healthy, fruitful, well-adjusted life. 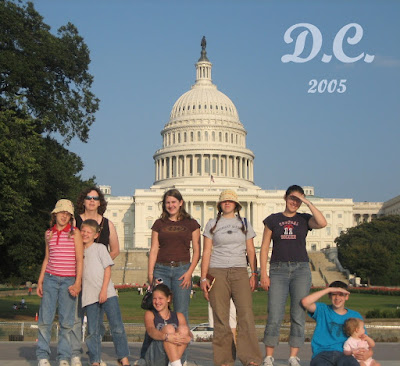 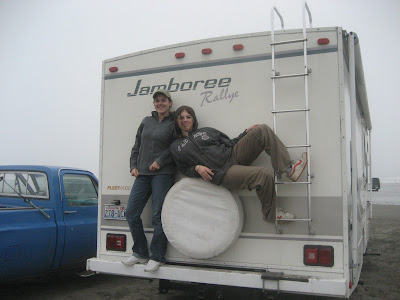 Whenever somebody asks me if I think home school is a viable option, my answer is emphatically and unequivocally yes.  The real treasure to be had is far beyond education or scholarships.  Far greater than valuable and useful head knowledge.
It's priceless; it's incomprehensible to anybody who has not experienced it.  It's true kinship.
cheers,
Mrs H
twitter.com/_mrs_h
Many thanks to my mom, who scanned all of these pictures from her albums for me!!

Email ThisBlogThis!Share to TwitterShare to FacebookShare to Pinterest
Posted by Mrs. H at 9:54 AM
Labels: fun, Home life, homeschool