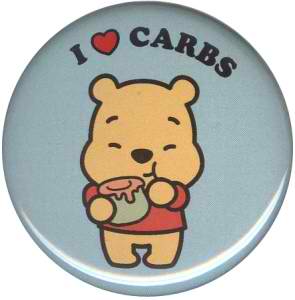 In an earlier post, I made a reference to a mysterious Mrs S.  "Who," you asked, "is Mrs S?"  She is another Navy Wife - she lives in an apartment near the hotel where I am staying, only about ten minutes away.  She and I met in a morning kickboxing class at the gym, and she came over to our hotel room after class for an oatmeal-and-dried-fruit breakfast.

Somehow, we realized that we both share a passion for good food.

She is a vegetarian, a voracious reader, and a vigorous believer in organic produce.  Ah!  An oasis of cold, non-GMO water in a desert of Midwestern McDonalds and Walmart towns.  She is a reviewer for the Sacramento and San Francisco book reviews, and has already shared with me a stack of delicious books and recipes.

When I found out she had her own oven, I immediately suggested she invite me over to bake bread - I'd give her a cut, of course; as a serf, it was only fair that I pay my taxes!  She saw the wisdom of my generous offer (ha!) and said sagely, "There's something to be said for sharing an oven!"

The next day, I was at her house with pans of bread dough ready to bake.  Since then, she and I have had several festive baking affairs; most recently, we made some pies on a stormy morning.

After baking pies in the morning at her apartment, we made a dinner that evening in the hotel.  Potato gnocchi in a homemade marinara sauce!  Four couples sitting on various beds, chairs, and the floor, eating from shared plates!

Fortunately, I have yet to meet any strangers here in Illinois.

Hotel Room Potato Gnocchi
Dress this up as much as you like by adding chopped cooked vegetables, meats, and herbs.

Peel (if desired), quarter, and boil the potatoes.  Mash or rice them until they are perfectly smooth.  Mix in one egg, and then begin pouring in flour and kneading with a spoon and then by hand, until it takes on the consistency of a very thick dough.  (I used a mixture of white, whole wheat, and cornmeal - you could use any flour.)  Try not to knead the dough to death, or it will be a bit tough. 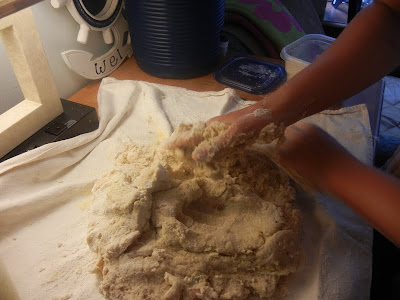 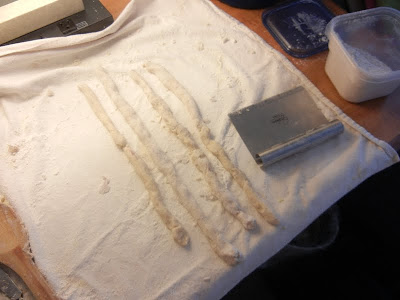 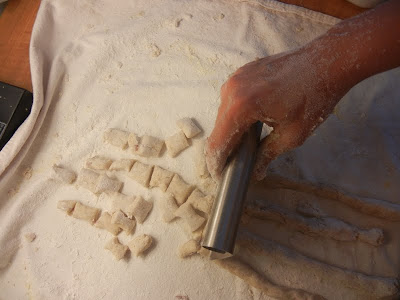 Drop the pieces into a pot of boiling water; as they float to the top, skim them out and drain in a colander.  Place in a mixing bowl and add sauce a little at a time to keep from sticking together.  (You could rinse them in cold water, too, but we did not do this.)