It is a truth universally known that there are as many recipes for borscht as there are Jewish grandmothers.

So I should probably confess two things here - 1) I am not a Jewish grandmother.  2) This is probably not a true borscht.

It is just a soup with beets in it, hence, this American calls it borscht.

It is the simplest soup I make, and it is hands down my favorite.  When we made this for dinner a week after I delivered our son, I ate almost a half-gallon of it.  It's that good.  Forget the biscuits - pour me more of that purple stuff! 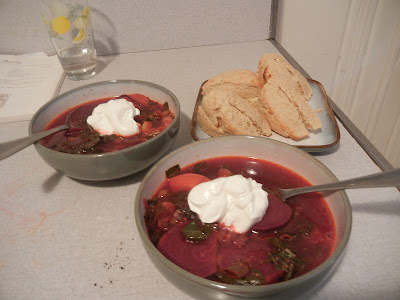 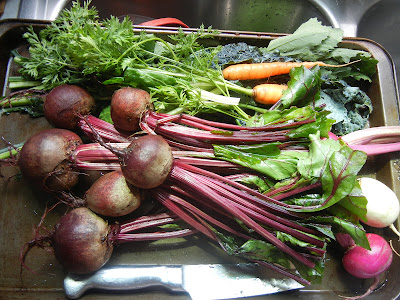 All of this went into the pot for our big soup!  Yes, every leaf and twig! 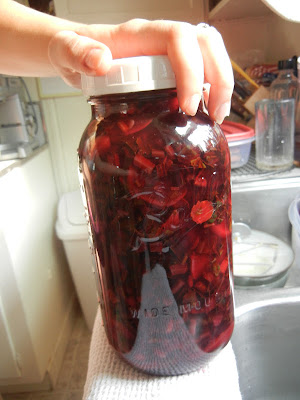 Un-True Borscht
I make a huge pot of this and put the leftovers in jars for later - it never lasts more than a day in the fridge.  The good thing is, I don't feel guilty pigging out on this ... read on to know why!

Chop, slice, or dice the vegetables (I prefer slices for some reason).  Include the tails, greens, and skins of the beets and other root vegetables.  Chop the greenery finely.

Put it all into a pot and cover with water, with an inch of headspace.  Bring to a boil and boil for twenty minutes or until the root vegetables are soft.

Add salt and pepper as desired.  Serve hot with a dollop of sour cream, or a pour of heavy cream.

Mrs H
twitter.com/_mrs_h
Life as a Wife on Facebook