The Experience - Unloading Our Household in Virginia

After three delays (and they almost delayed delivery again, until the following week - we would have found this out an hour before our items were due to arrive) our household goods finally arrived in Virginia ... but not necessarily in the best of shape!

Every family that has moved with the military is familiar with dings, scratches, broken items, missing items.  So it wasn't with a whole lot of hope or significant expectation that I watched the truck doors open and the items begin to flow out.

When the truck pulled up, he was over-height and almost took out the cables hanging from the telephone wires across our street.  Mr H hollered, and he stopped; we solved the problem by having somebody stand on the back of the truck with a broom lifted high, and as the truck approached the wires they used the broom to push it up and over the top.  We thought that problem was solved, and moved on. 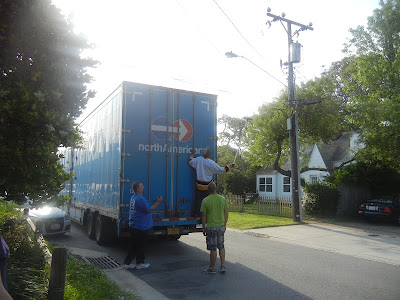 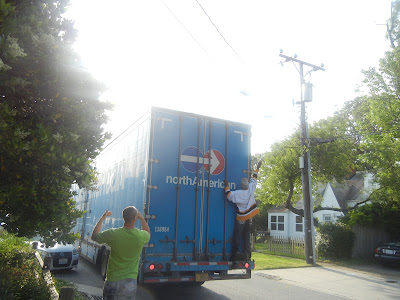 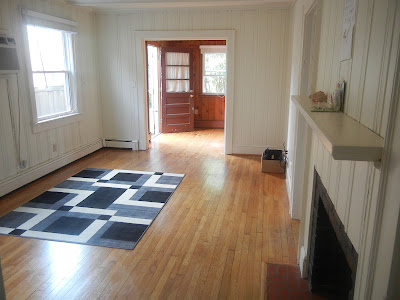 The guy unloading our stuff was inebriated.  Not the driver, but the man he hired.  He smelled of alcohol and couldn't walk in a straight line.  It was hard to understand what he said (mostly just calling out numbers of boxes, but any sentence was a puzzle).

They pulled my husband's baby, his barbecue, out of the truck.  My husband loves his barbecue; he saved up for it, bought it on sale, and after every use he scrubs it, washes it, and puts away all the tools meticulously - and we use it a lot!  For his birthday one year, my mom gave him a whole case of barbecue cleaner.  He loves that stuff!  (Too bad we couldn't bring any with us - when I asked the movers what items they couldn't pack, so I could carry them in the Jeep, they forgot to mention quite a few things, including batteries and aerosol cans - so all of that got left in Washington State!)

The movers were pretty unsentimental about it.  It has two pieces extending off of either side - one is a little counter for placing items and cooking tools on, and the other is a mini burner for cooking pork'n'beans.  You cannot lift the heavy barbecue by these side panels - they are flimsy, bendable metal, and cannot support the weight of the cast-iron grill, metal interior, et cetera.

Mr H told them this as they took it off the truck.

Trouble began before the work even started: when they unloaded the barbecue, one of the wheels was missing.  So they dragged it across the brick and pavement, crashing and bouncing with every step.  After shattering one of the caster wheels in this manner, they hiked it up by the fragile side panels and hauled it out back to the deck.  They balanced it, tottering, on the deck; the side panels are now cranked up and the metal pulled out and away, bent, where their hands were tugging on it.

Mr H looked like he was in pain but all he could do at this point was take pictures and record the damage.

Then they returned to the truck to unload my baby - my pride and joy - my piece de resistance for the kitchen ... the coveted chest freezer that Mr H bought for me last Christmas.  I was inside the house when Mr H came in.  "The freezer ... is pretty damaged."  My heart sank.

I rushed outside to the deck and watched in horror as they pushed it up beside the pitiful barbecue.  The lid was buckled and caved in, causing the seals to warp up on the sides so that they didn't even make contact with the freezer, the back of the lid bulging like a slipped disc.

"This was like this when I picked it up," the driver said.

"This dent was in the lid," he said, pointing to the destroyed top of the freezer.  "Check the paperwork."

When we purchased our freezer, there was a small, aesthetic dent.  This is truly recorded in the paperwork;
"Dent by outlet."  The lid is now completely ruined; the freezer is inoperable.

"Yes, it had a small dent," I said, "but it was not completely ruined like this."  I only speak in italics when I am very upset!

"When I went to pack it," the driver said, "there was a speaker sitting on top!  That must have made this dent.  When it was in the truck, the only thing on top of it was that light little love seat inside."

Our couch was on top of  the freezer, in a truck, for 21 days, as it drove from Washington state to Virginia, stopping for 5 other military moves along the way.  And you want to tell me a delicate, foam-and-particle-board speaker resting on top of it for a few hours did more damage than that.

I've sat on top of that freezer (not recommended, by the way) and it withstood my weight (which is ... significant).  This was not done by a speaker!

I went back inside to continue checking off the items as they were unloaded.  Polished bookshelves came in with deep grooves running down the side, fresh bits of wood and paint falling out.  Scratches on the table, on the furniture.  Our battered, cat-scratched, water-stained couches, purchased used on Craigslist, were without further damage; our cheap Ikea dresser, purchased in the pre-assembled discount section, and an old, beat-up dresser passed down from Gary's grandparents, were fine and dandy.

I noted every possible dent, groove, ding, and scratch to the nth degree, making meticulous note of everything.  A Navy wife with nine moves under her belt advised me, "Better to make note of every possible thing and maybe not get paid for quite all of it, than to under-annotate and not even break even and be bitter about it later."  With camera and notebook in hand, I am definitely taking her advice!

This was all stuff we observed before a single box was unloaded, too!

As the truck driver left I heard shouting and hollering outside; as he drove away I came outside to see that his truck ripped out the cables hanging across our street, leaving a long black cable hanging down into the road and through our trees, across our driveway.  Not sure what to do, I called the moving company, they referred me to accident reporting, I filed the claim with them, and then I took pictures and emailed them in with our reference number.

People back home were confused as to why I was so resistant to having the Navy run our move, a decision which we fought tooth and nail up to the last minute.  "It must be more convenient," they told me.  "They pack everything, they move it, they unload it."  Everybody forgot to add one last thing - they don't care!

I thank God that my husband is safe, I am safe, the baby is safe.  Those are the big things.  It sure would be nice to not have to deal with all these hassles, though!  Have you ever had movers move your stuff?  If you're in the military, how do you usually choose to go about your move?  Based on our experience, I can't say I'd recommend it to anyone. . . 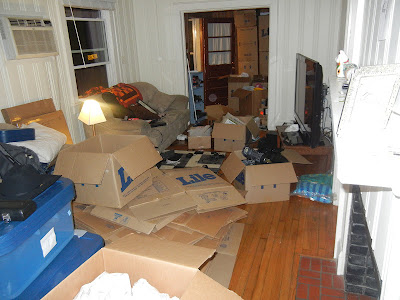 Everything has now found a home - it took some creative engineering to make it all fit!  Life is so comfortable with the simple luxuries of a bed, a couch, and silverware!