Parting Out a Chicken: Why I Buy Whole

We buy our chicken whole, from a family a few miles from us that raises, butchers and sells them frozen throughout the year.  I've been in the practice of buying whole chicken since we got married, because it is cheaper by the pound.  As you quick-witted ones may point out, that is because I am also paying for the useless weight of bone - but I beg to say that it is not altogether useless.

We buy our chicken at $4.95 per pound.  You may think that is very pricey, but remember what goes into raising a real chicken when it lives outside a factory; I am happy to pay the true cost of meat, and we place a great deal of value on it when we do eat it.  We eat a little less meat than perhaps the average, and it is more sacred to us.  Life, after all, should be taken with great thoughtfulness.

I would not buy chicken from a grocery store like Walmart, Albertsons or Costco; just a visual check, and I can see that the meat is not fresh and is of poor quality.  Color, texture and smell are all different from a chicken purchased straight from the farm.  When I open the package, I always find it is rancid with a viscous, slimy liquid.  You might not notice that it's rancid, though, if you've never seen fresh chicken - just like I didn't realize I was drinking rancid milk, until I went raw.  In a random test of 819 samples of raw meat from 59 stores in supermarket chains, Zhao et. al found that 70.7 % of the chicken contained the bacteria Campylobacter (which can have the nasty side-effect of total, permanent paralysis, or just the unpleasant effect of giving you lots of UTIs), 38.7% contained the potentially deadly E. coli, and 3% contained Salmonella (which can, in addition to many other terrible things, leave you with permanent reactive arthritis symptoms).  These bacterium, and many others like them, are present in factory-raised poultry and meats - organic and conventional both, although organic slightly less - due to the unsanitary practices that go on behind closed doors - and the simple, mathematical presence of thousands of tons of manure. 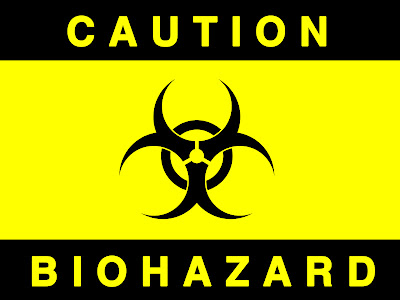 Buying organic, factory-raised meat is not sufficient to protect your family; feces are feces, whether or not they are organic, and in a large factory with often illegal practices and most definitely over-crowded and unsafe living conditions for the poultry, the contamination levels are high.

Of course, the solution offered by the FDA is to cook the ever-living love out of your poultry until it is beyond dry and scour your counter with bleach after preparing any raw meats.  Anything containing the bacteria Salmonella, Campylobacter, or E. coli, has to be treated like haz-mat.  That's right!  The raw chicken you just picked up at the grocery store counts as a hazardous material - now enjoy eating it tonight!

Suffice it to say that after learning all of this, I switched from buying organic meat in the grocery store to buying small-batch, locally-raised meat.  And I buy it whole, because that is the cheapest per pound... which brings us back to our discussion of dollars to doughnuts. 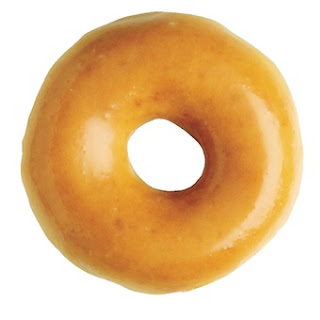 The organic, free-range, local family-raised chicken I parted out this morning was 3 pounds, 10 ounces (1.657 kg).  At $3.95 per pound, that's $14.32 for the whole thing.  After I cut off the breasts, thighs, drumsticks, and wings, the remaining carcass was almost one pound.  A pound of waste?  I think not.  I put the carcass in a pot of water, brought it to a boil and now will let it simmer for a day and a night (or just a day).  The resulting broth will measure about four - five quarts (I don't use any special formula, just pour in water to fill the pot).  We'll say conservatively, then, that the rich, golden, fatty broth costs about $1/quart.  I can use it immediately, put it in the fridge for later use, freeze it in plastic containers or glass wide-mouth pint jars, or pressure-can it, whichever is more convenient at the time.  Pacific Natural Foods Organic Free Range Chicken Broth costs $4.59 a quart,  or even $3.76 if you go through a buying club.  Additional flavors are added to their broth, including evaporated cane juice - a turn-off for some.  I don't add any flavors (such as turmeric) to my broth, but if I were it would only increase the cost by a few cents per quart.  If I were to buy all this broth I just made, it would cost (at a minimal estimate) $15 - 18 dollars, and it wouldn't even be of the high quality that homemade is.  I would have no assurances of how or where the chicken was raised, and I would have potentially questionable ingredients to deal with.  Subtract the cost of the carcass, and I just saved myself a minimum of $10 - 14 ... this chicken is already paying for itself! 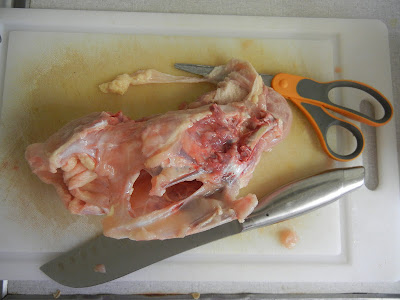 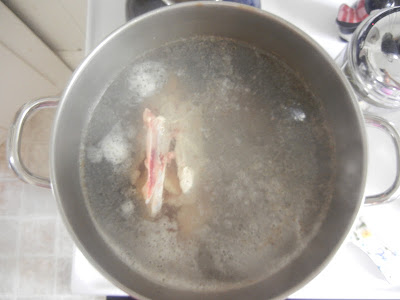 When I first started using whole chicken, I didn't know how to cut it up and so I went to YouTube to find a how-to video.  I slowed the video down and cut up a chicken while watching it.  If you've never used a whole chicken before, here is a helpful tutorial on learning how to part a chicken by Ian Knauer, food editor for Gourmet magazine.  (If you watch the video, I will note - I am a little lazy and generally just cut the breasts off the whole carcass.  Everybody develops their own system.)  You can part up your chicken in the beginning of the week and use the pieces throughout the week, or you can part up a few chickens and freeze the pieces separately for later use. 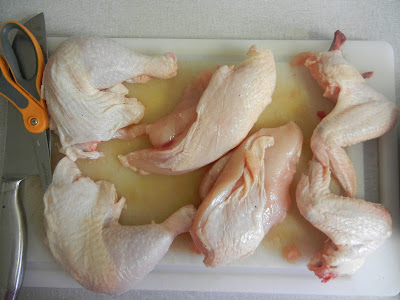 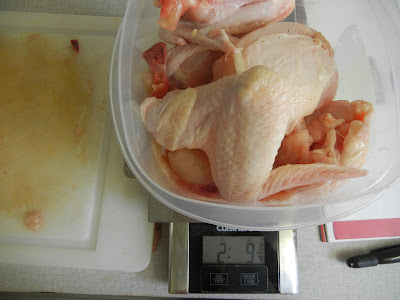 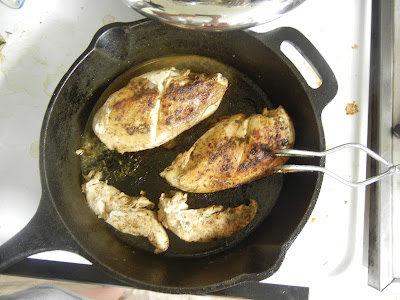 When you pay the real cost of food, you begin to place a premium on things that you might normally throw away.  Waste becomes minimal.  The leaves of beets, radishes, turnips and carrots are now delicacy items that we can't wait to enjoy.  Soured milk is a sought-after commodity.  Beef bones and poultry carcasses are precious for the broth they bring; and we begin to appreciate all aspects of the food we consume, not just the skinned, boned, pasteurized, aseptically packaged identically-sized portions we see in the grocery store.

So, the question is - are you a colonist?  Or does E. coli need to find another home?