Dear watchers of the twilight hour and burners of the midnight oil,

We had made it to our motel in Big Timber by 2:30 in the morning. Seafoam had toppled into bed and I wearily crawled into mine.  I was so tired I could barely see straight, and I was sure I'd fall asleep immediately.

Of course, that didn't happen.


No, there was no Hitchcockian fear of the elderly lady who had sleepily given me the key to my room after I had awakened her by pounding on her door per her instructions earlier that night.  While brushing my teeth in the bathroom I had observed a quaint spider skating around in the bathtub, but there was certainly no knife lurking in the shadows. 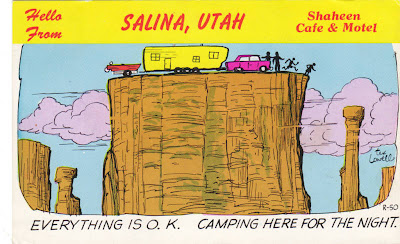 In fact, the room was very old-fashioned and rustic, and there seemed to be nothing malignant slinking about. It was in truth this old-fashioned rustickness that most likely set flame to the wick of feverish thoughts that plagued my only half-lucid brain.

Yes, for some reason at this witching-hour I was lying in bed with my body screaming in hoarse anxiety at me, pleading eloquently for sleep, but my agitated mind began to imagine little red bugs oozing from the fabric of the old mattress and leaking across the sheets, nibbling on my skin and sucking greedily at my blood.

That little old lady looked pretty feeble, I thought.  There's no way she comes in here at strips these beds down every day.  I'll bet out here in the country, they just say, "Nah, 'honly bin slept in sivin or eight times, hern won't mind if hisn skin cells are a-flakin' off in thet thar sheet."


That's more or less what I thought, anyway.  On a desperate impulse I leapt out of the blankets and lay on top of the colorful, woodsy-themed quilt.  As if that would really do any good, I was to later scoff at myself in the safe morning light.  I pondered going out and bringing in my comforter from the car, but then I shuddered at the thought of the infestatious little creatures weaving their way into my personal blanket, and scattering once I put it back in my car.  No, no, I must freeze on top of the quilt during the Montana night.

You ever have those weird dreams that seem to meld with real life, and you wake up and fall asleep at least a hundred times and can never quite discern reality from the figments of your imagination? Small wonder I woke up in the morning with sunshine sneaking in around the 1960's green curtains feeling as though twenty head of wild cattle had trampled across me throughout the night and then the farmer's wife had put me through a clothes ringer and strung me up from a clothesline to dry until sunlight. 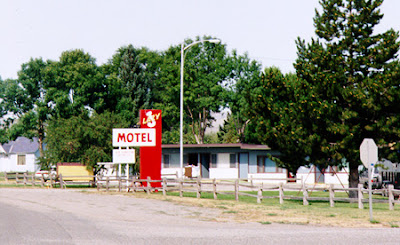 Morning finally did arrive, and Seafoam and I showered leisurely and repacked our things.  There was, of course, no sign of bedbugs.  The rascals apparently never showed their beady little faces during the night.  We left the motel by 9:30 in the morning and, despite encountering patches of chip-seal roadwork all along I-90 through the rest of Montana, made it to Idaho by 3:00.  Since the Mountain Time/Pacific Standard Time zone runs along the border of Idaho, we immediately gained an hour and traveled back in time to 2:00.  (Seafoam started repeating herself, which was how I knew whenever we hit a new time zone.)

We reached Spokane, Washington by late afternoon and spent a delicious evening not driving, relaxing with close family friends, going out to dinner, and staying up late playing games with dear girlfriends.


We left Spokane the next morning after a full night of rest and recuperation, and made it home within a few hours.  Another trip in the books!  We planned to rest, recover, visit, pack, clean, exercise, see the sights, and leave for our next trip within two weeks.
That, of course, didn't go quite as planned.

Email ThisBlogThis!Share to TwitterShare to FacebookShare to Pinterest
Posted by Mrs. H at 7:00 AM
Labels: fun, Home life, Navy, travel