Stones and Trails and Prairie-Dog Tails

To the readers that gather in close,

As I mentioned in my last post, something Very Terrible happened when we got to Wyoming, and it involved just a little bit of law-breaking.

But we'll get to that.

We stopped at Badlands National Park, one of my favorite places in the world.  They were called mako sica by the Lakota, les mauvaises terres a traverser by the French, and tierra baldia by the Spanish.  All of these names mean, more or less, "bad land" or "waste land".

When you walk on to the crunchy white sand of the badlands, the silence weighs in on every side.  No animals chirping, no wind blowing, as the rocky steppes rising on every side block out noise with their enormity.  Moments before, you were surrounded by billowing grass and more locusts than you could shake a honeyed stick at, but now all you can see is white walls, white rocks, white canyons, white gullies.  The badlands are full of fascinating geological history and paleontology, including fossilized camels and rhinoceros-looking creatures.  But ancient days were hardly yesterday for these stones; time seems to hang suspended as the rocks sit silently, patiently, waiting.

Waiting for you to die on them, parched to death and burned by the scorching sun.  So much for poetry...


Badlands - Then and Now... Can you spot the difference in the following two pictures!?
I stumbled across a quote from Frank Lloyd Wright, and it summed up my first impressions of this beautiful, dreadful land perfectly:
"I was totally unprepared for that revelation called the Dakota Bad Lands.  What I saw gave me an indescribable sense of mysterious elsewhere."
We moved on through the Badlands, joining thousands of the Sturgis riders on our South Dakota tour as we stopped at Wall Drug, trekked up to Crazy Horse (which looks exactly the same as it did six years ago, which is exactly how it looked thirty years ago), Mt. Rushmore (I suppose in all fairness, this rock looked the same, too), an old homesteader museum, and a prairie dog town.

Over the years, the Black Hills have hosted Indians, trappers, gold rushers, and tourists.  They are so densely forested, they remind me of home! 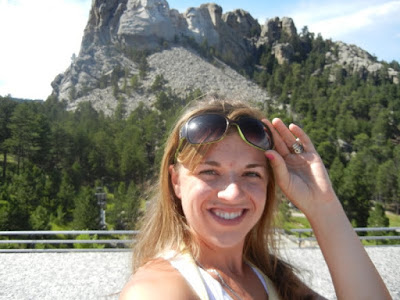 The Crazy Horse monument has been under construction since 1948.  It is on privately held sacred Indian land, about 17 miles from Mt Rushmore; the statue and the heritage museums below were commissioned by the Lakota tribe.  While the monument seems to be progressing slower than a woman with back labor, the museum and shopping 'plex have expanded enormously over the years.  If completed, this statue would be over 641 feet wide and 563 feet high, making it the largest non-religious statue in the world.  (Ironically, the previous world-record holder is the Russian Motherland statue, or Родина-мать зовёт! which I visited the same year I saw Crazy Horse for the first time.  If you've seen Enemy at the Gates

, then you are already familiar with the hill in Volgograd on which this behemoth of a woman stands.)  If you stay for the evening, you can enjoy a lovely laser light show where they use lighting to illustrate history in the Black Hills.  Since the monument will probably never be completed, you might as well enjoy the laser show (we didn't stay for it this time around).  And I have to admit, it is cool to listen to the music while sitting in the pitch black mountains with the sound echoing off the cliffs around.

Seafoam was fully enamored of the furry prairie dogs... 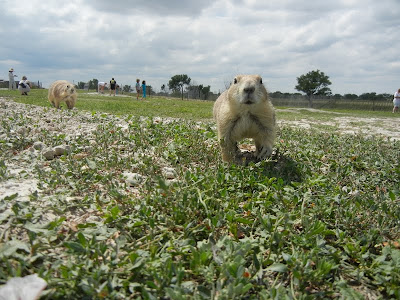 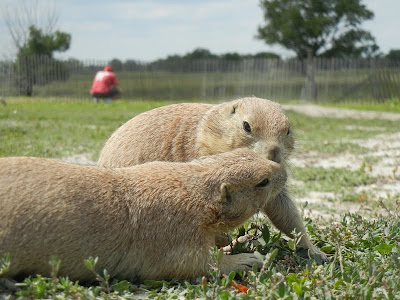 By the time we reached the exit for Devil's Tower, another wonderful national monument, we didn't feel like stopping any more and trucked right on by, heading up and out to Wyoming.  We hoped to shoot straight as an arrow and make it home by Saturday night, giving ourselves two more days to drive through Wyoming, Montana, Idaho, and Washington.
But we were anxious to see Montana by nightfall, and that is where our trouble with the law began ...

All I can say is, so much for the Equality State!